It is the day after one of my favourite events of the Guiding year, Alberta Girls' Parliament. I have been involved with the event for many years. I started as a page when I was a Guide and Pathfinder, then as a delegate for three years- two of them being on executive as Alternate Leader of the Opposition and Speaker, and now as a staff member. AGP is an event that can change someone's life, direct them into a career path of public service, or give them the chance to make a life long friend. I could go on and on about how great I think it is, but I am of the firm belief that the best way to get a full understanding of an event is to hear it from the girls. 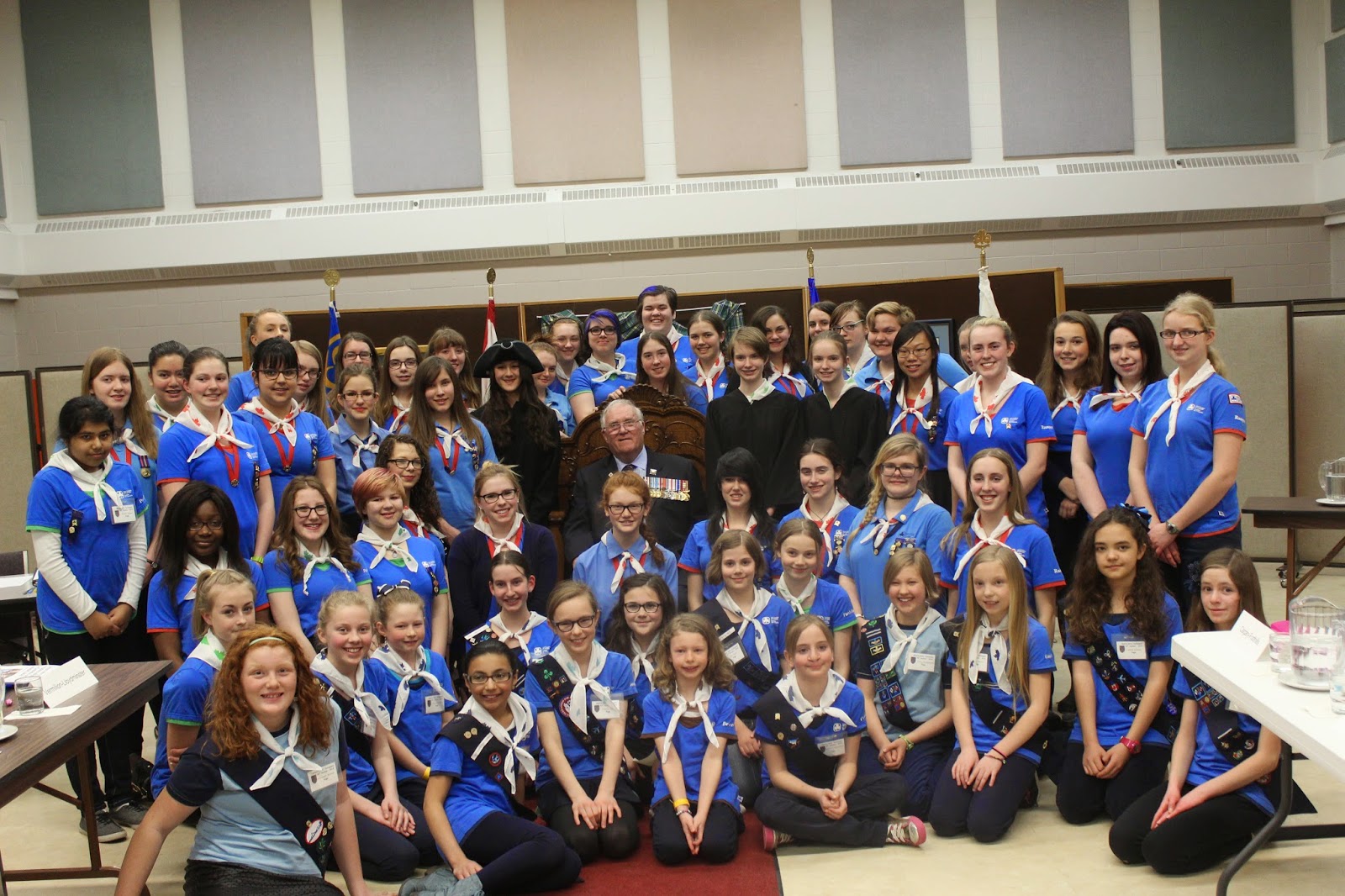 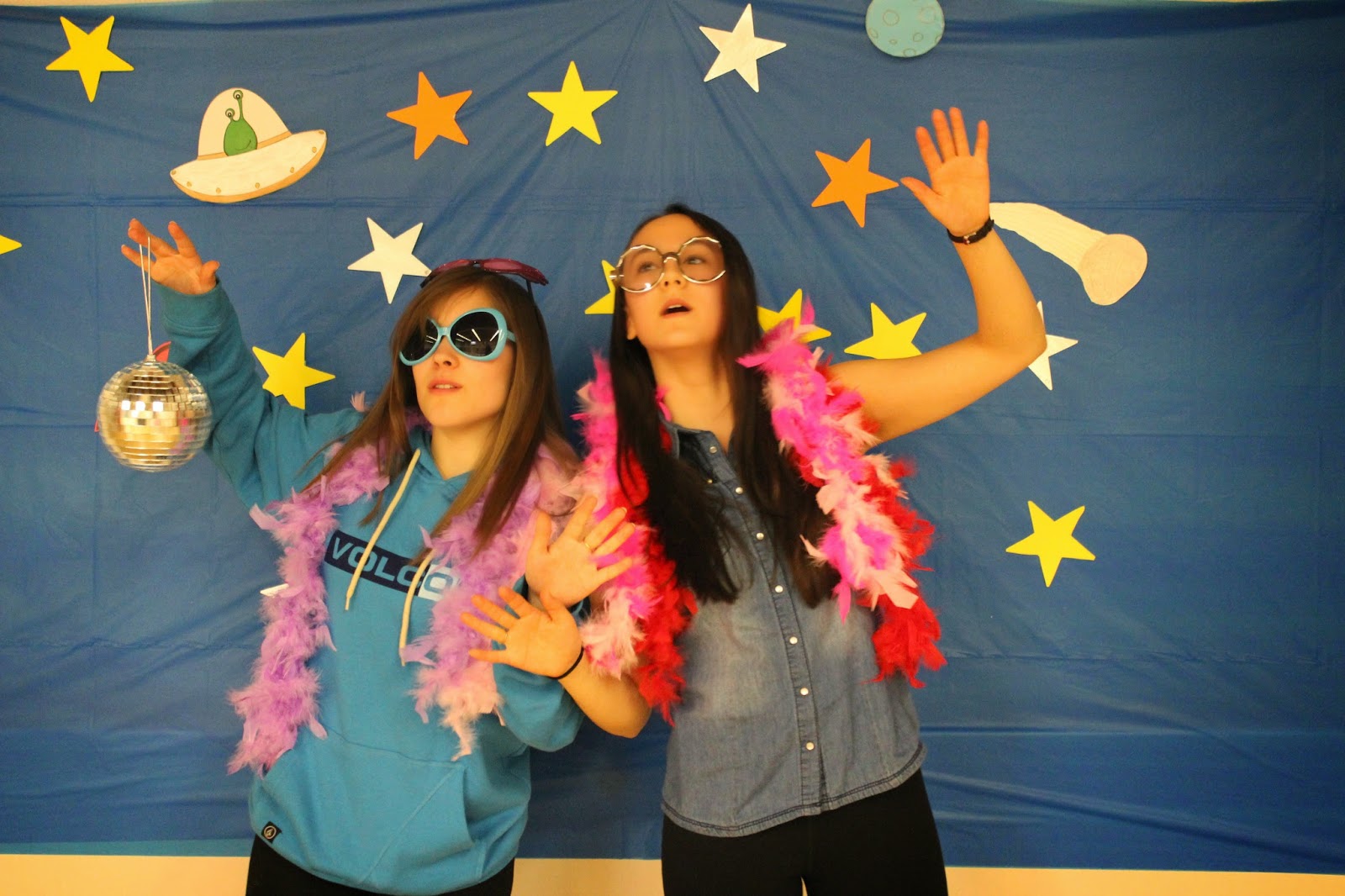 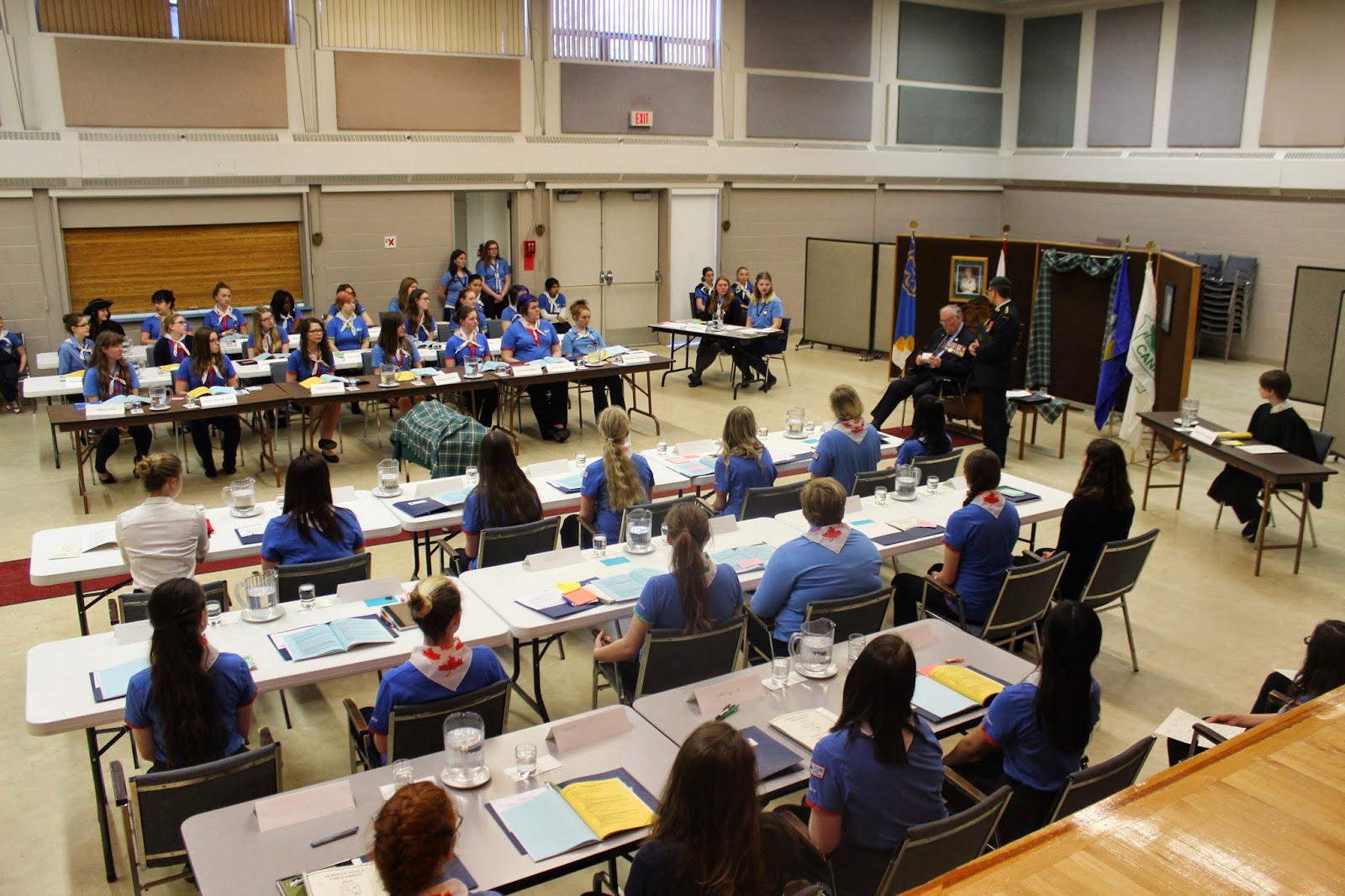 His Honour giving the Speech from the Throne 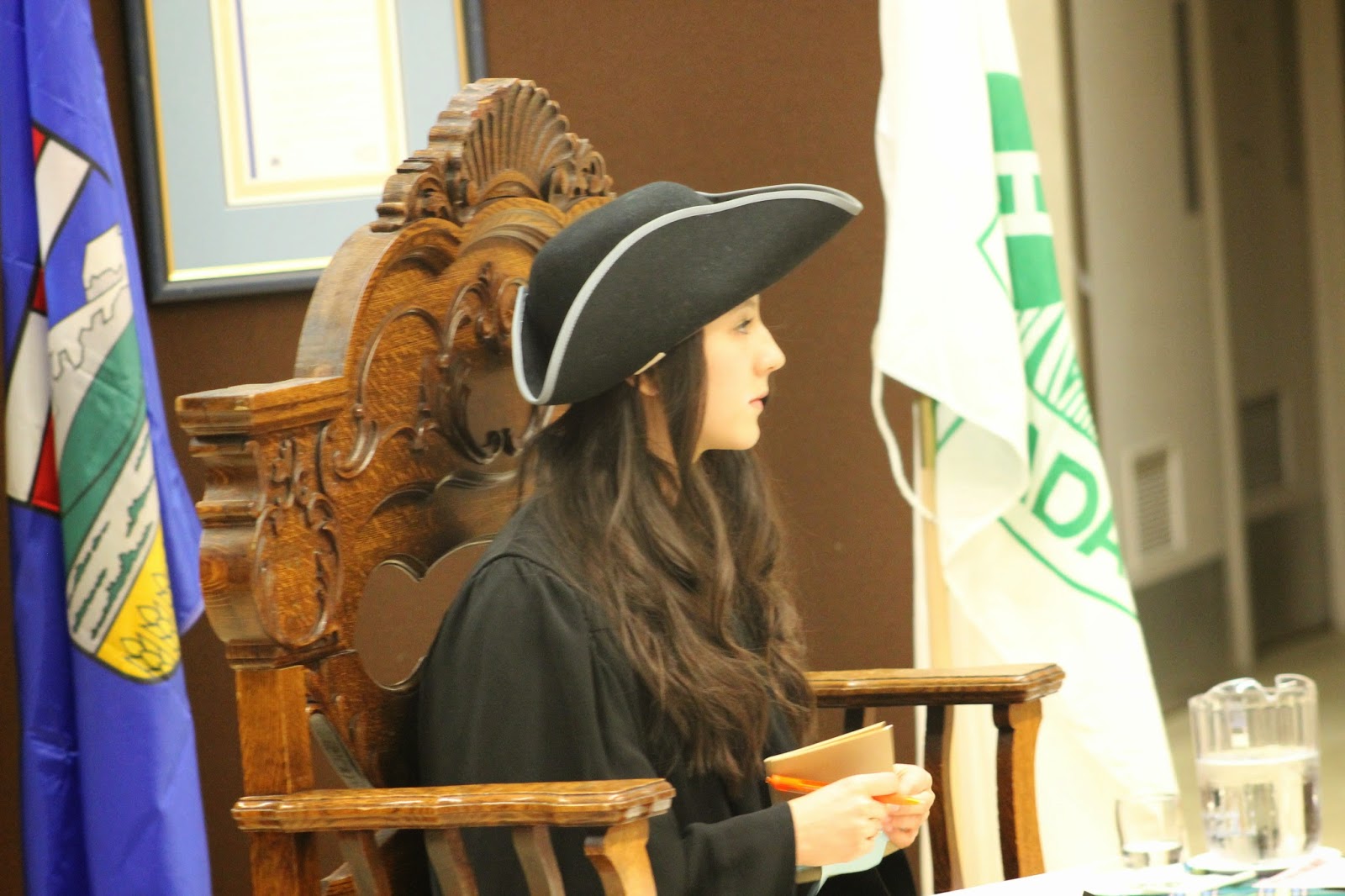 Madame Speaker actively listening to a point from the Honourable Opposition 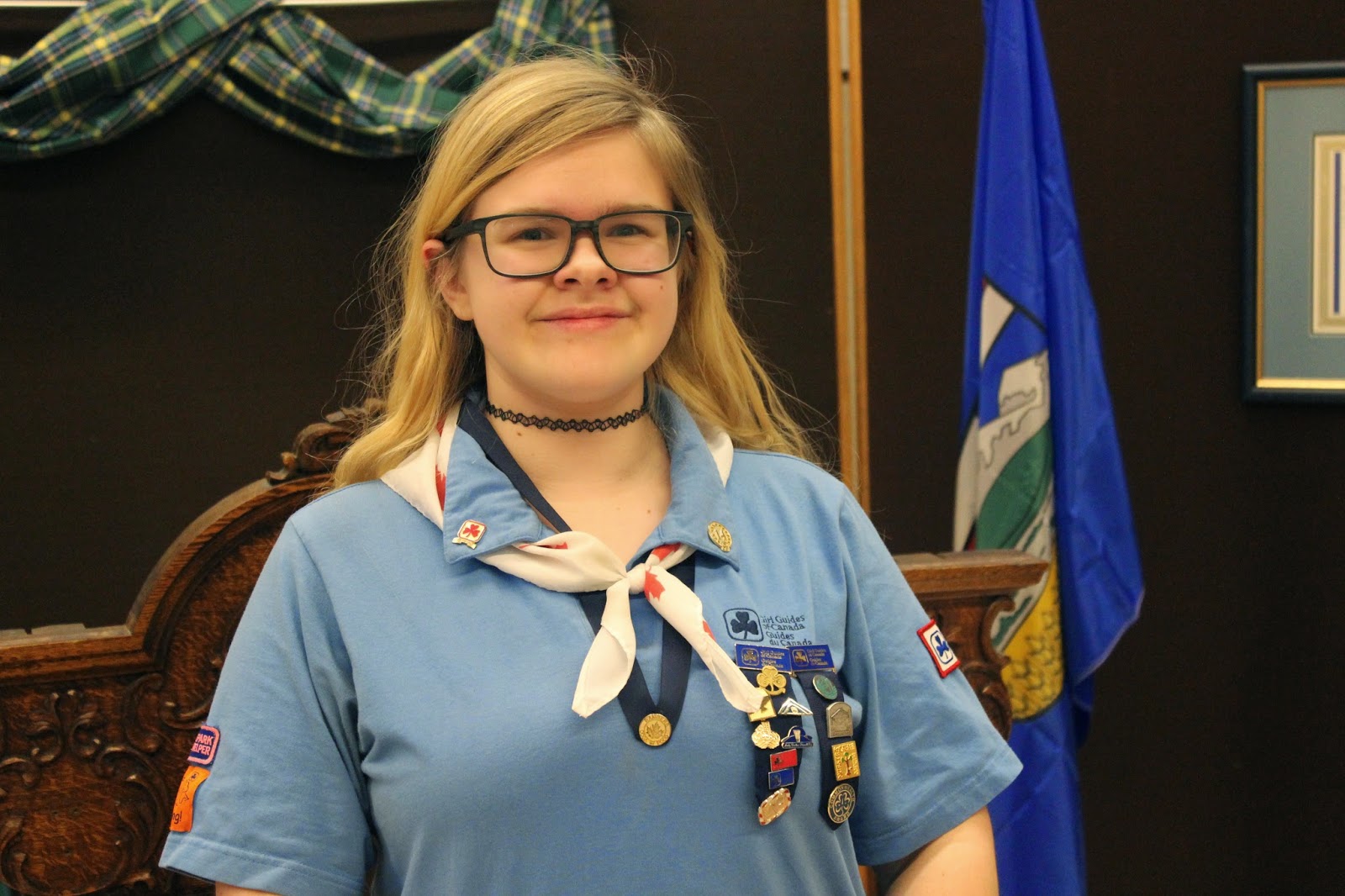 Imogen- I am so disappointed that I didn't harass my mom more. Unfortunately I was unable to attend Alberta Girls' Parliament during my first years of Rangers. Now as a transitioning member, I am coming to AGP for the first time and I've never been to a grander event than this!
At AGP girls truly show how they "share in the Guiding sisterhood." The moment the bus took off we were already laughing and joking with one another.
The debates are amazing! It is truly astonishing to hear the arguments and speeches delegates have given. As a first time delegate, the first time I stood up was shaky and my nerves were slightly rattled. Second time I became more confident. From then, members of the government (I am opposition) started "heckling" me. This mutual respect between the girls is truly the most awe-striking thing for me to experience. The girls here understand one another seamlessly and are completely supportive. Opposing sides still send each other notes of encouragement and everyone always laughs at the end.
After our first debate I will running for "Speaker of the House" who keeps order and announces the next "Honourable Member" to speak. I am so enthused about being here, even though the debates have just begun, I am planning to be here next year.
Another event was meeting people like the premier (in his office none the less) and the Lieutenant Governor. These amazing people are so supportive of the event and it gives a lasting impression on all the girls here.
Seeing how not even 48 hours ago I knew none of these people, to now where I am being told to "hurry up Immy we`re waiting," as we are about to go onto even more adventures, and moreover being here the first time to wanting to be a part "executive" board, dealing with the aftermath of nagging my mum to send me up to Edmonton us entirely justifiable- (even if I have to deal with the "I am your mother don't speak to me like that" speech.) 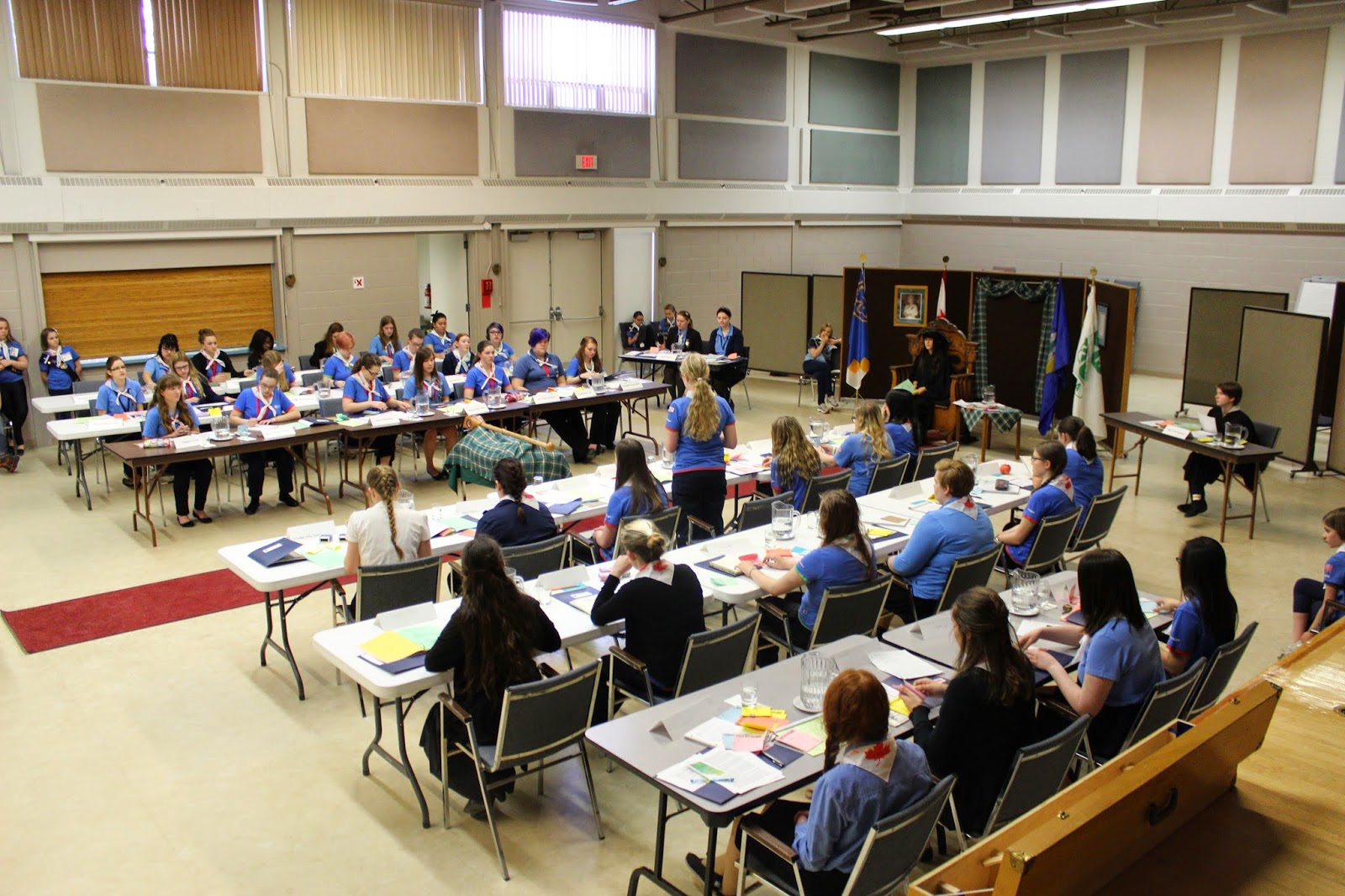 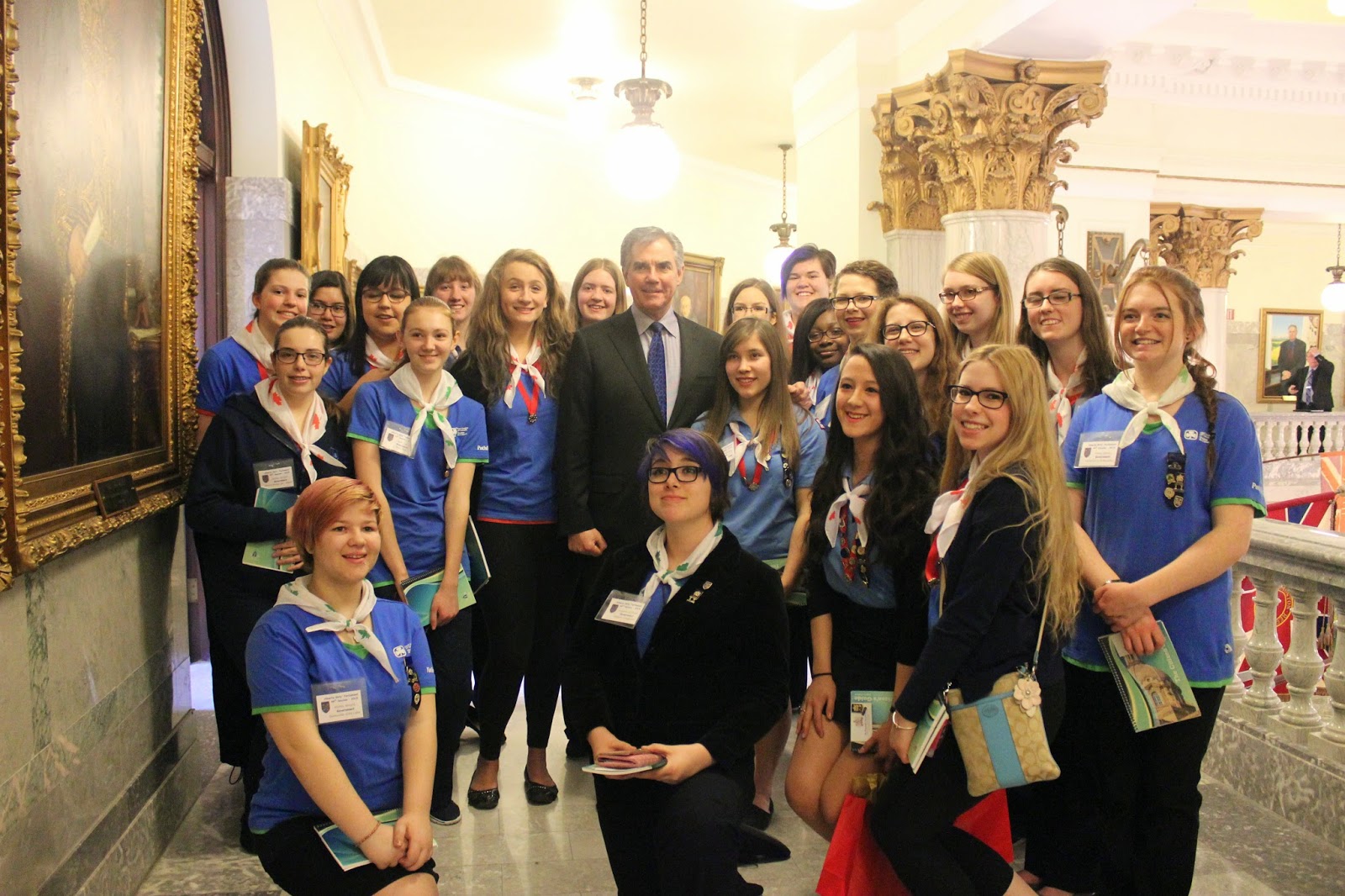 Delegates with Premier Jim Prentice at the Alberta Legislature 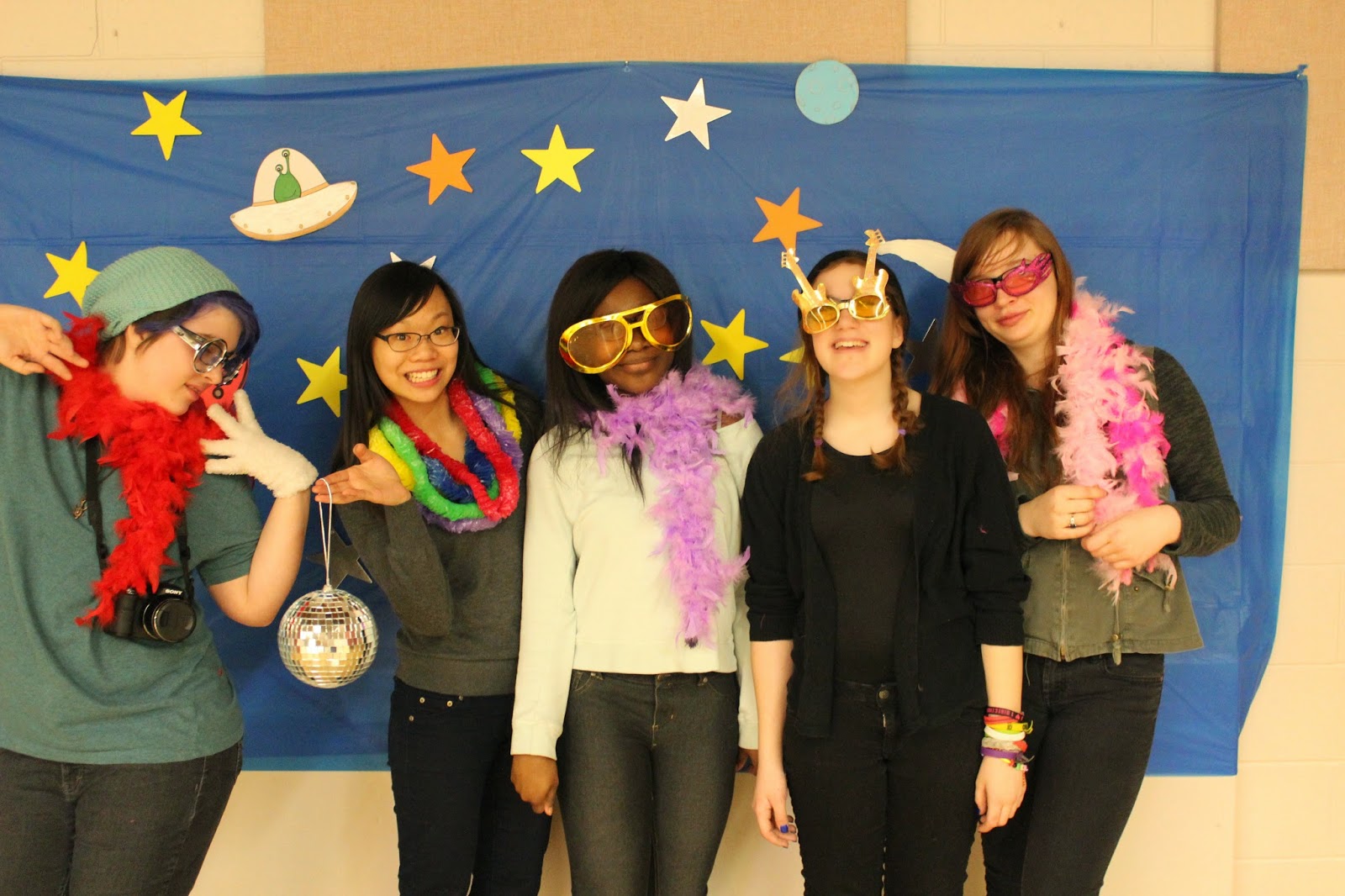 More delegates in the photo booth at the beginning of AGP 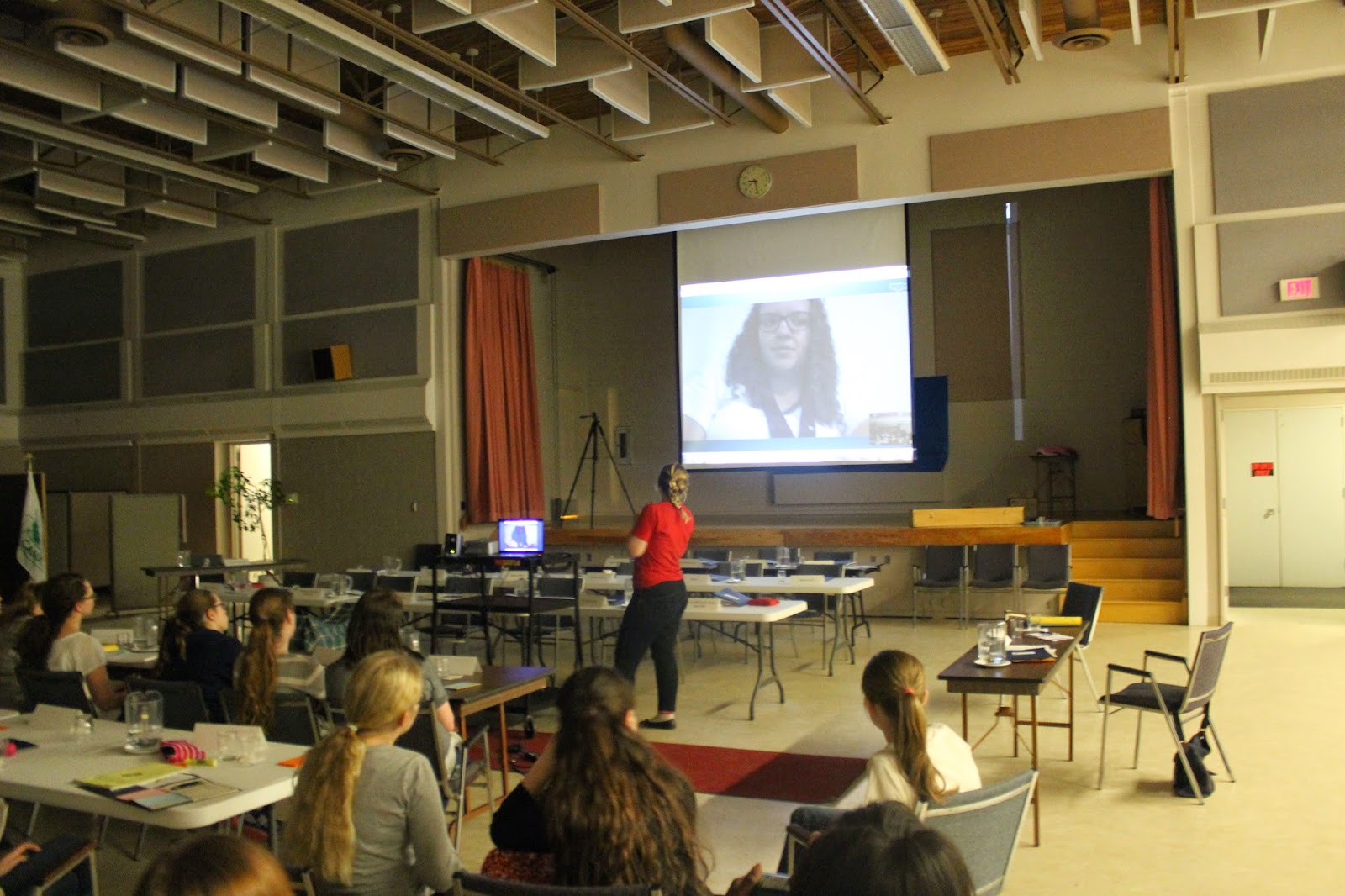 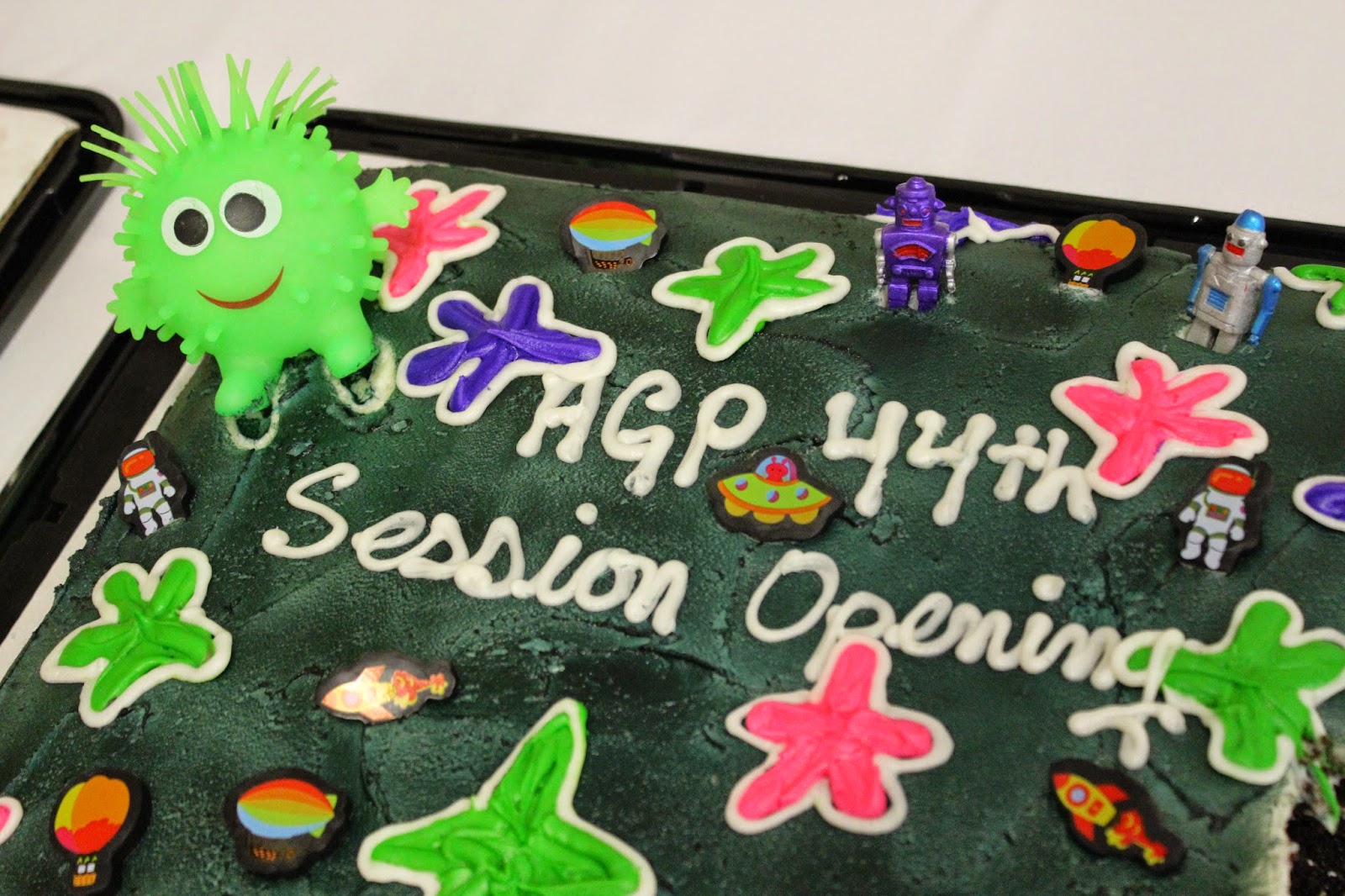 No opening of session is complete without cake! 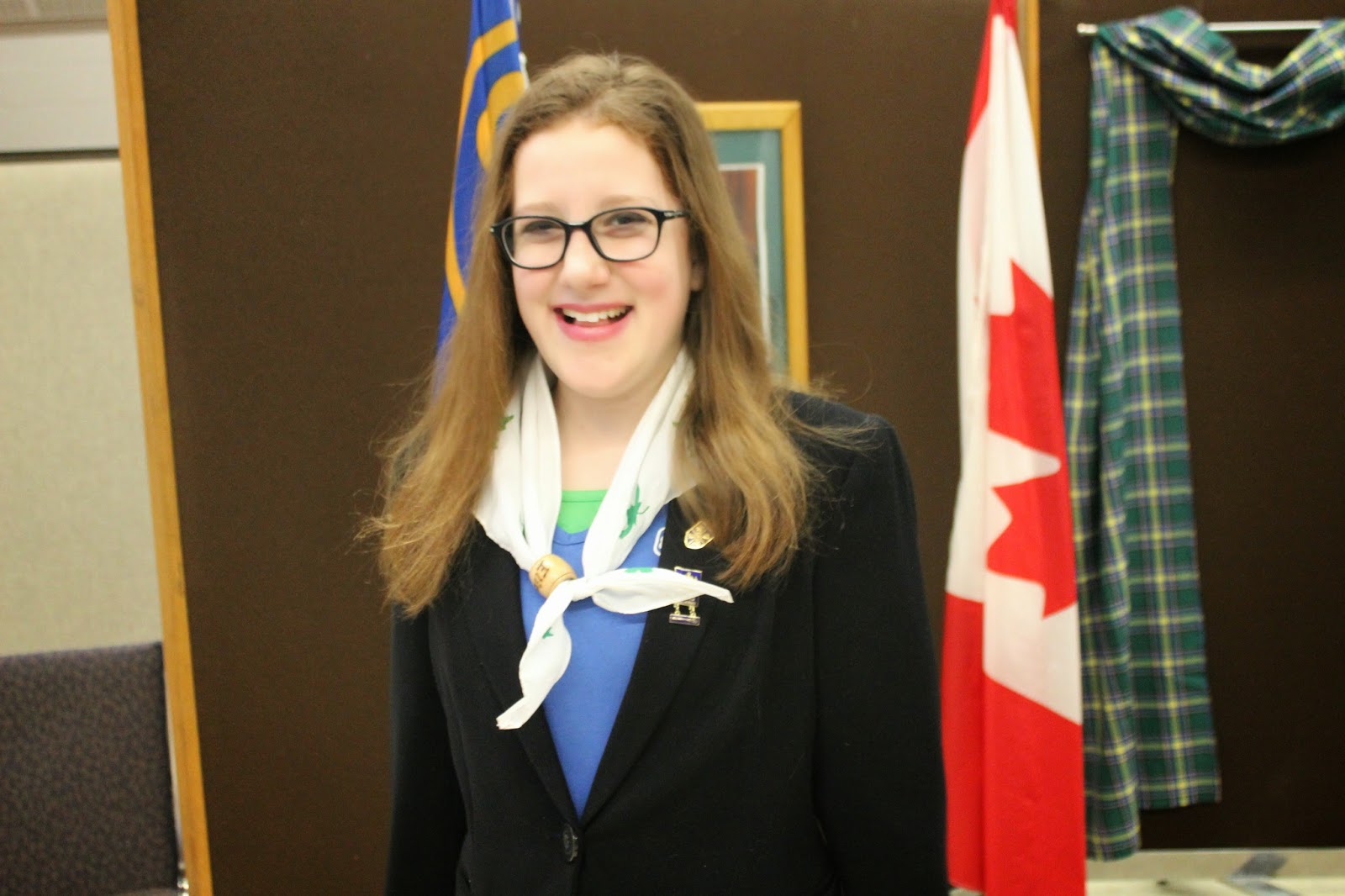 Lizzy- I'm Elizabeth"Lizzy" Barron aka the delegate representing Calgary Mountain View. This is my first time at AGP and I'm having a rad time. Our tour throughout the Legislature was a very interesting experience from the government caucus room, to the Premier's office, to the sassiest question period based on the newly released budget.We also began our debating where we were involved in caucus meetings. Being confident during debates is kind of hard at first, but is eventually getting easier. I'm so excited to come back to AGP next year and the enjoy the rest of this year's AGP. 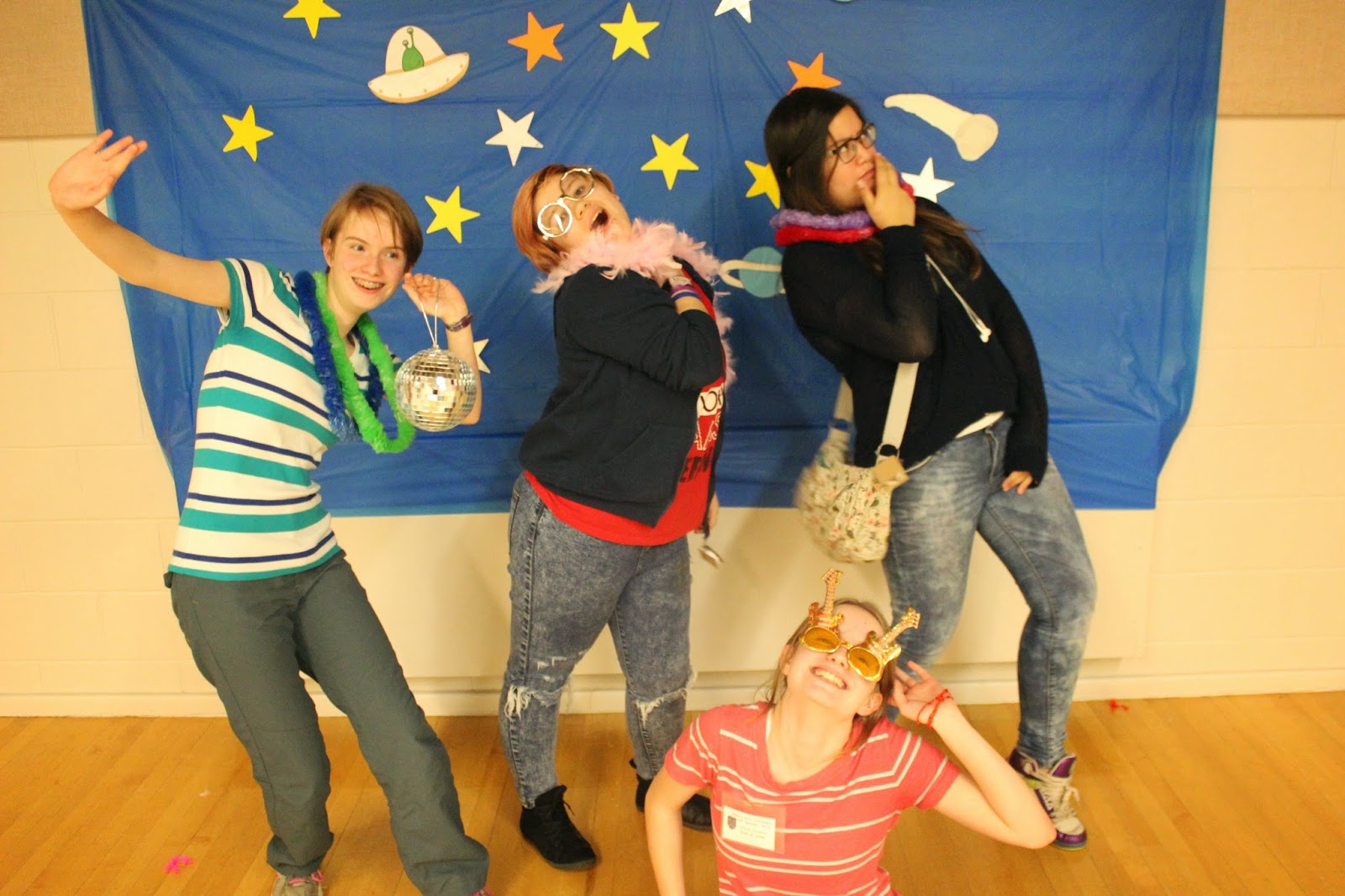 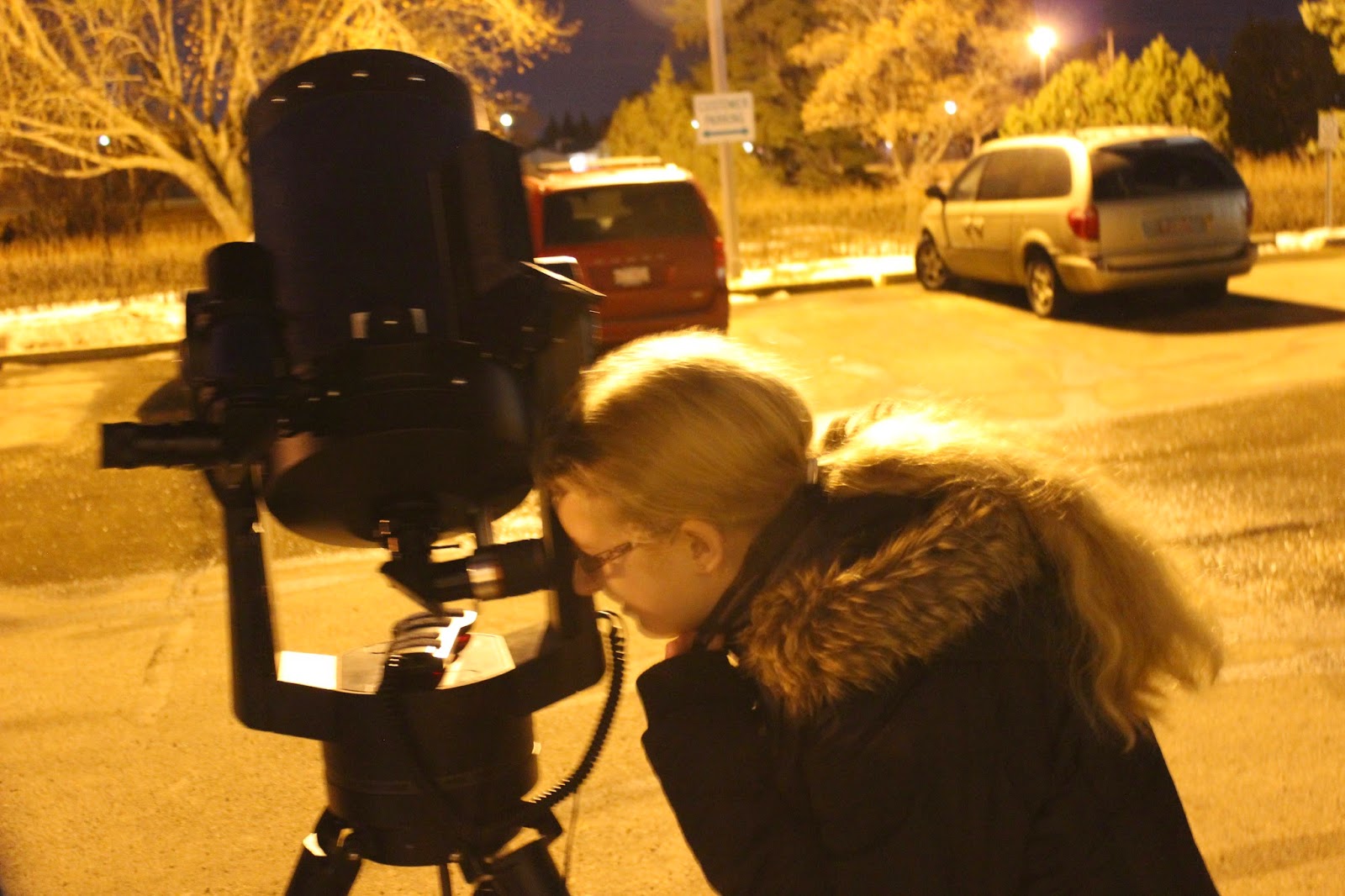 To keep with the Galactic Adventures theme, we had a member of the Royal Astronomical Society of Canada come and show us Jupiter and a few of its moons and our moon up close on the Terminator line. 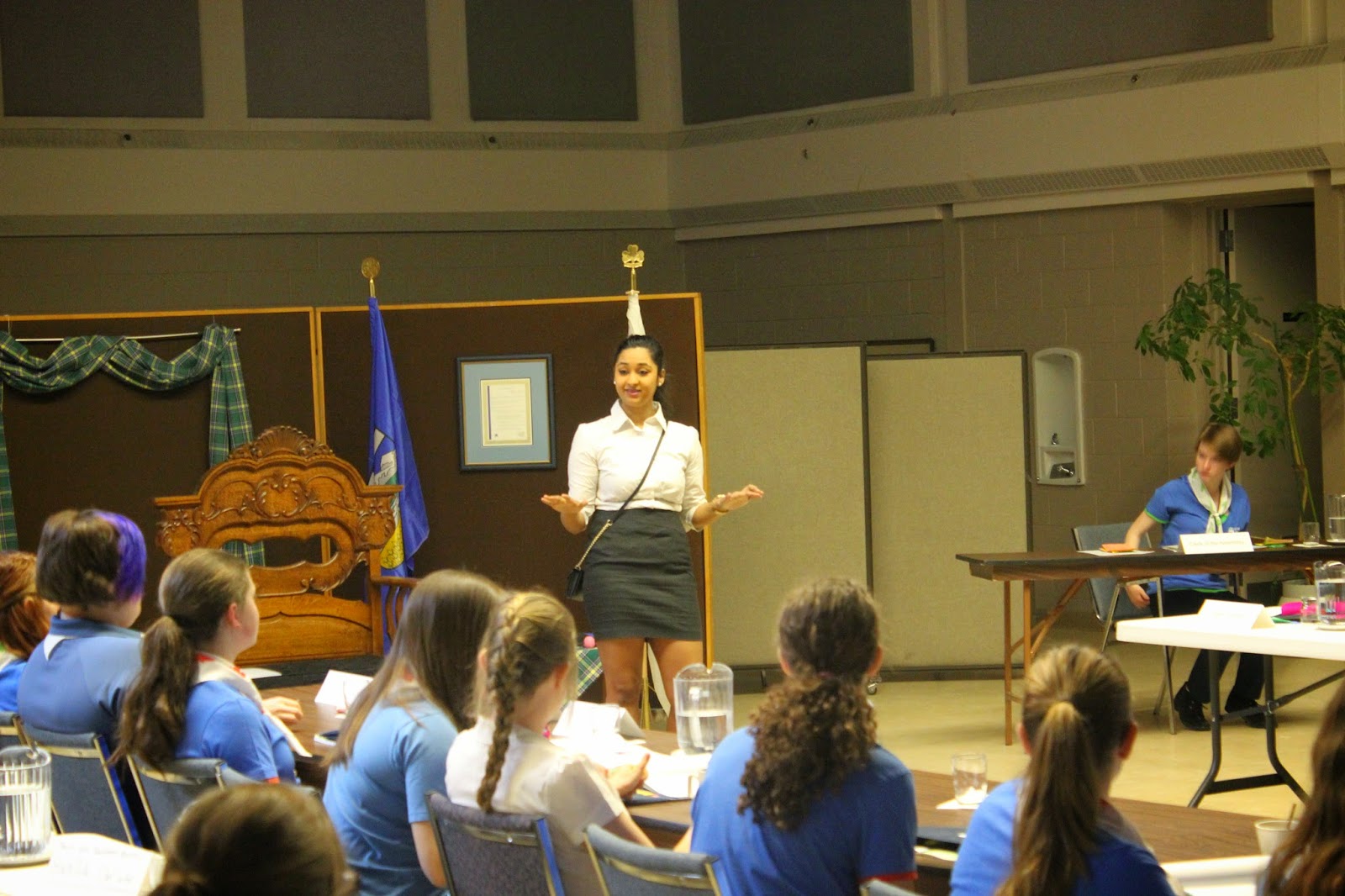 Sirisha Valupadas spoke to delegates about the United Nations, how it works, when it has succeeded and also when it has failed, as well as some current issues it is facing. The delegates were very engaged and listening to what she had to say! 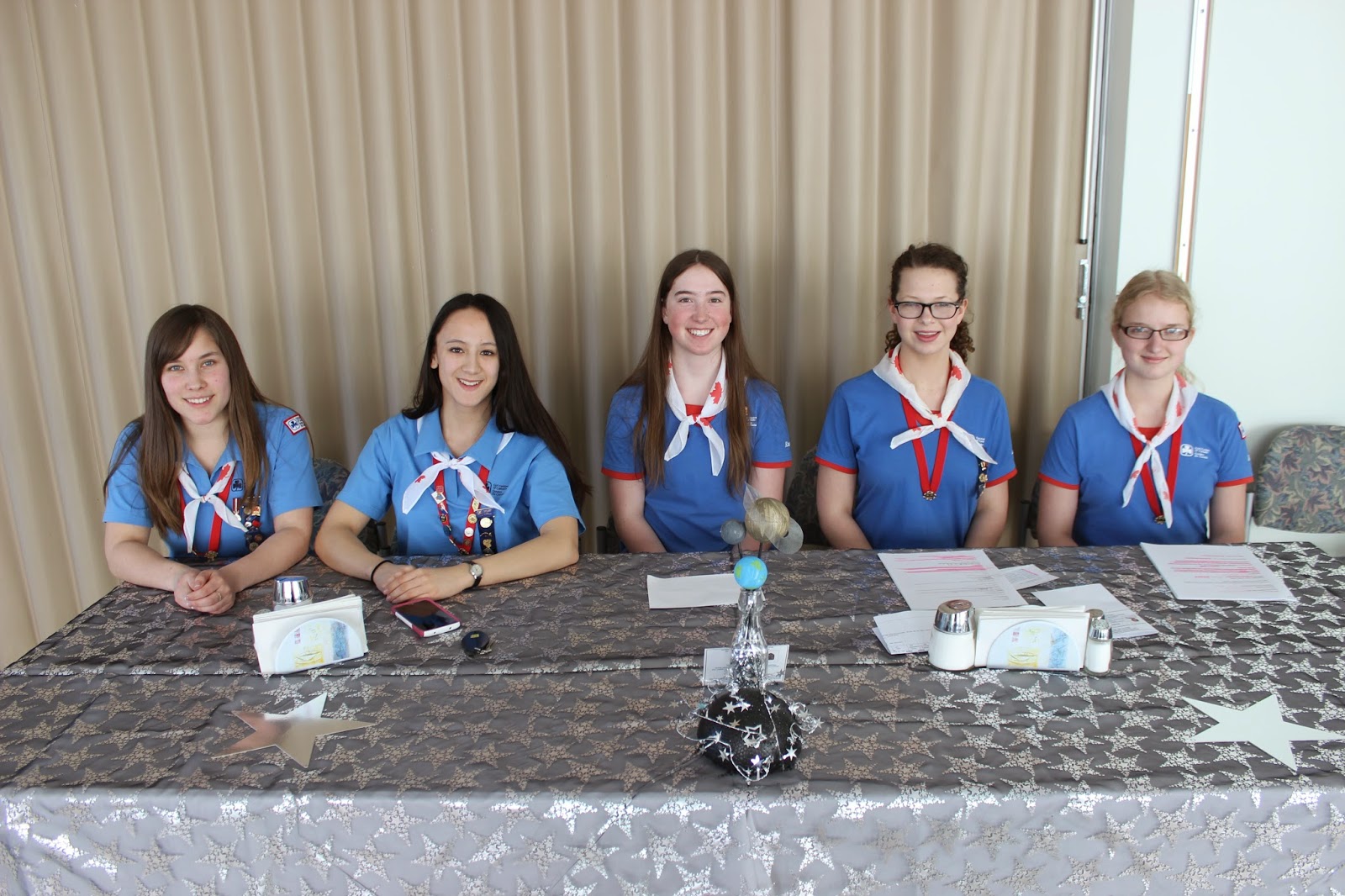 Executive at the Head Table at the banquet 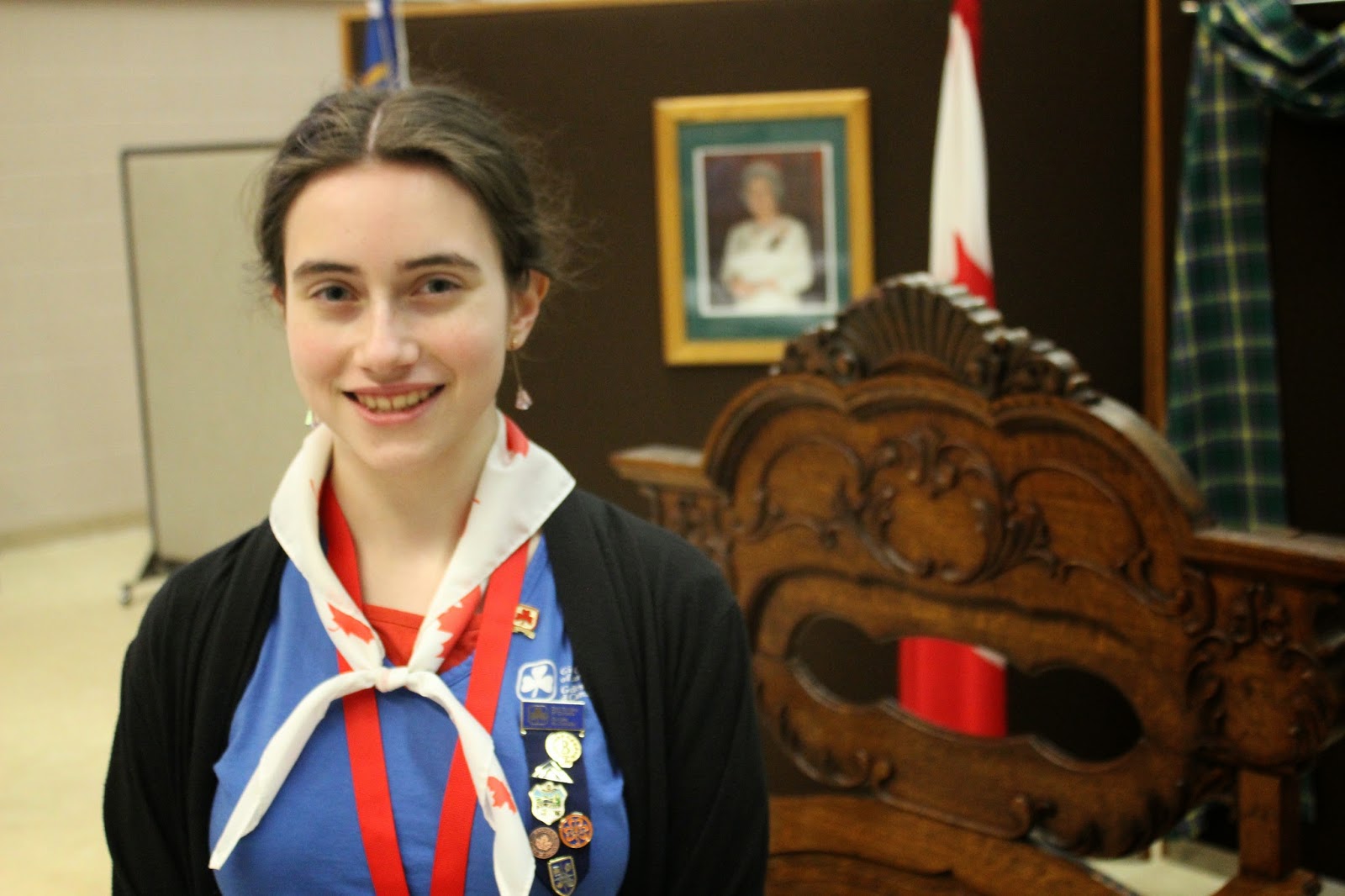 Anne- During question period at the Legislature building, we were able to observe the behaviours of various MLAs. I find that if the greater voting population were also given this opportunity, quite a few would change their opinions and decisions. The behaviours exhibited by many of these members seemed immature and wasteful of resources to me and many of the others. 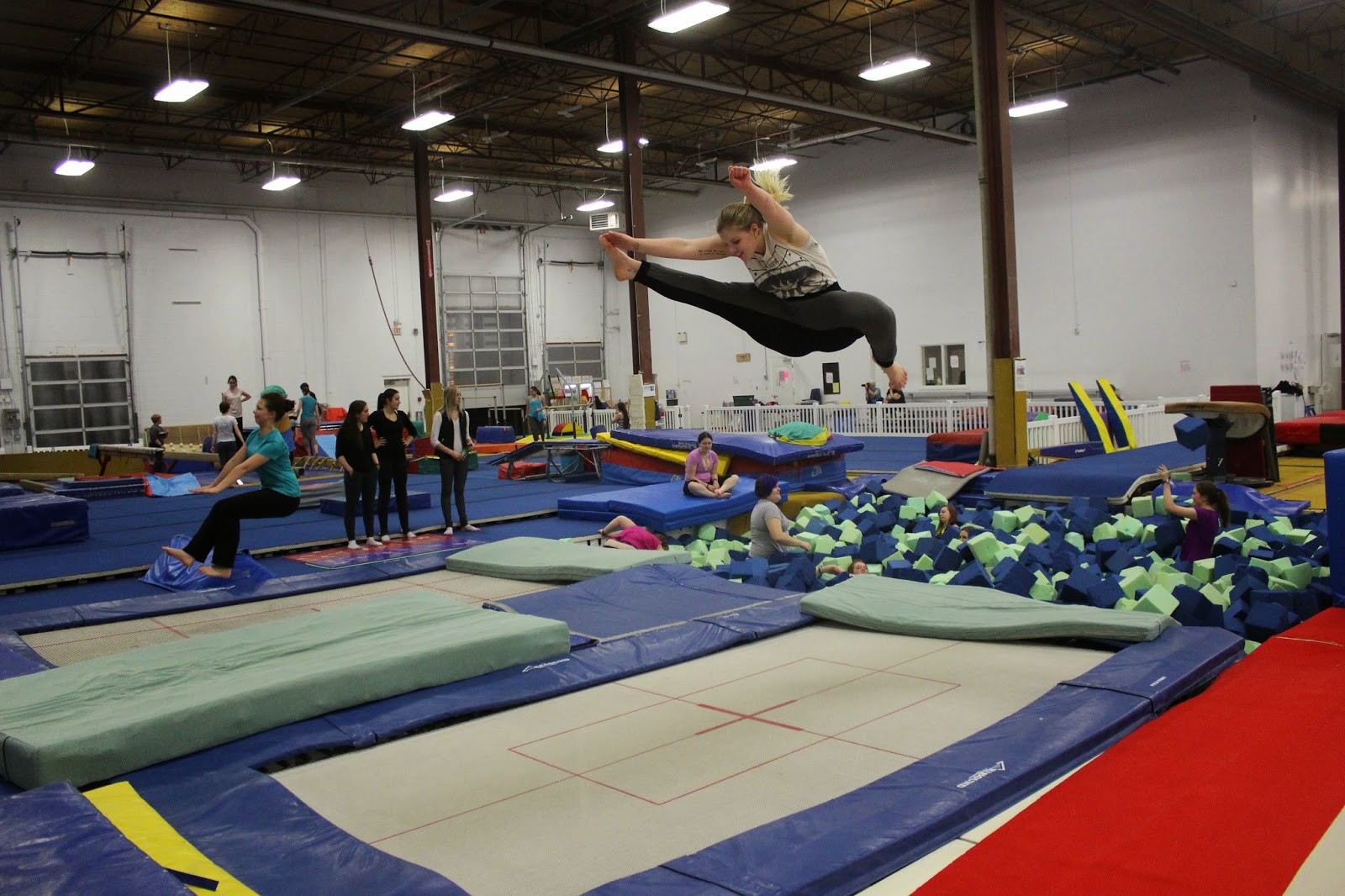 Our active living session this year was gymnastics. Delegates (and staff members) had a lot of fun on the trampolines 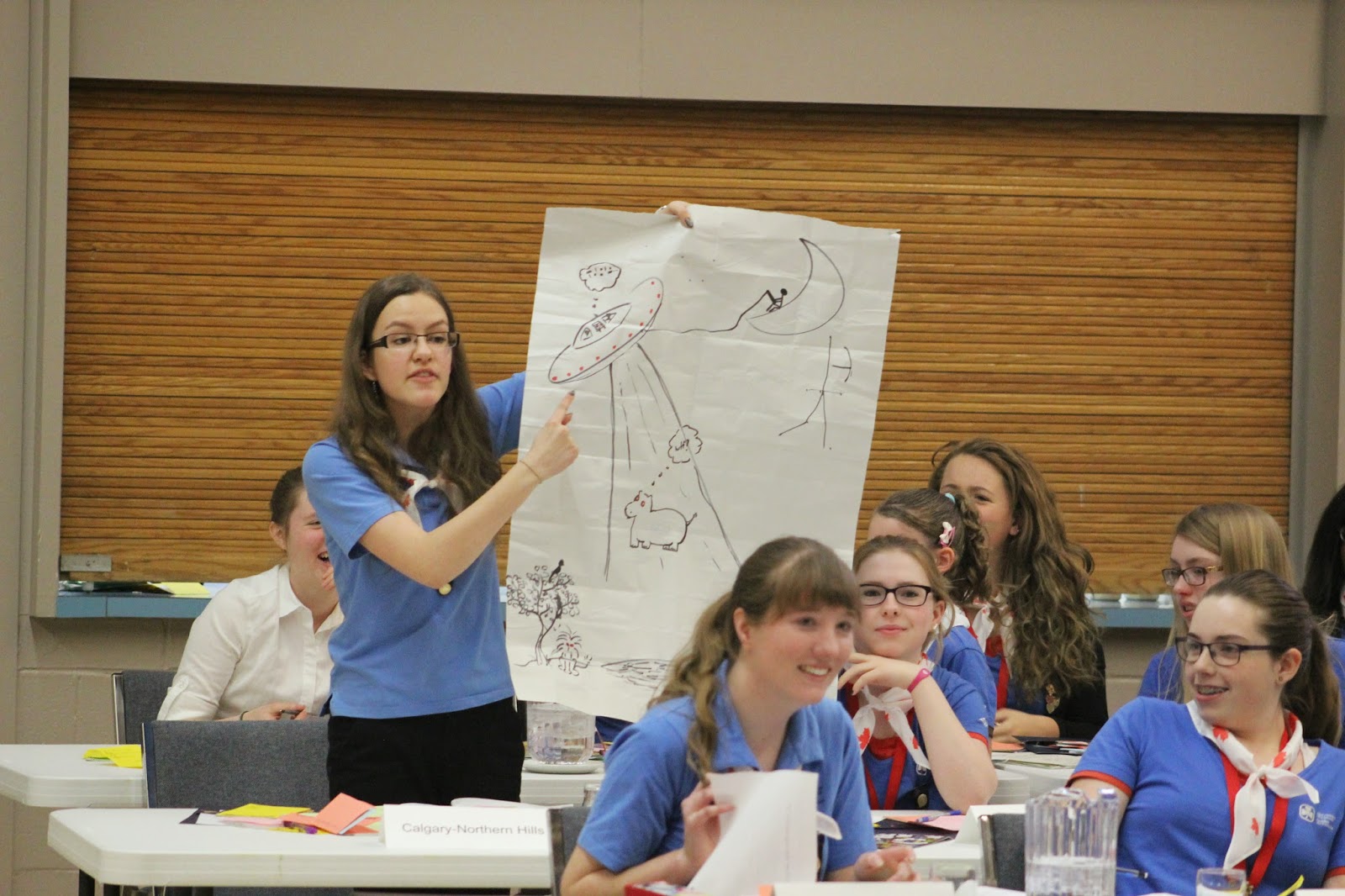 Very "important and official photos" of aliens during the fun debate 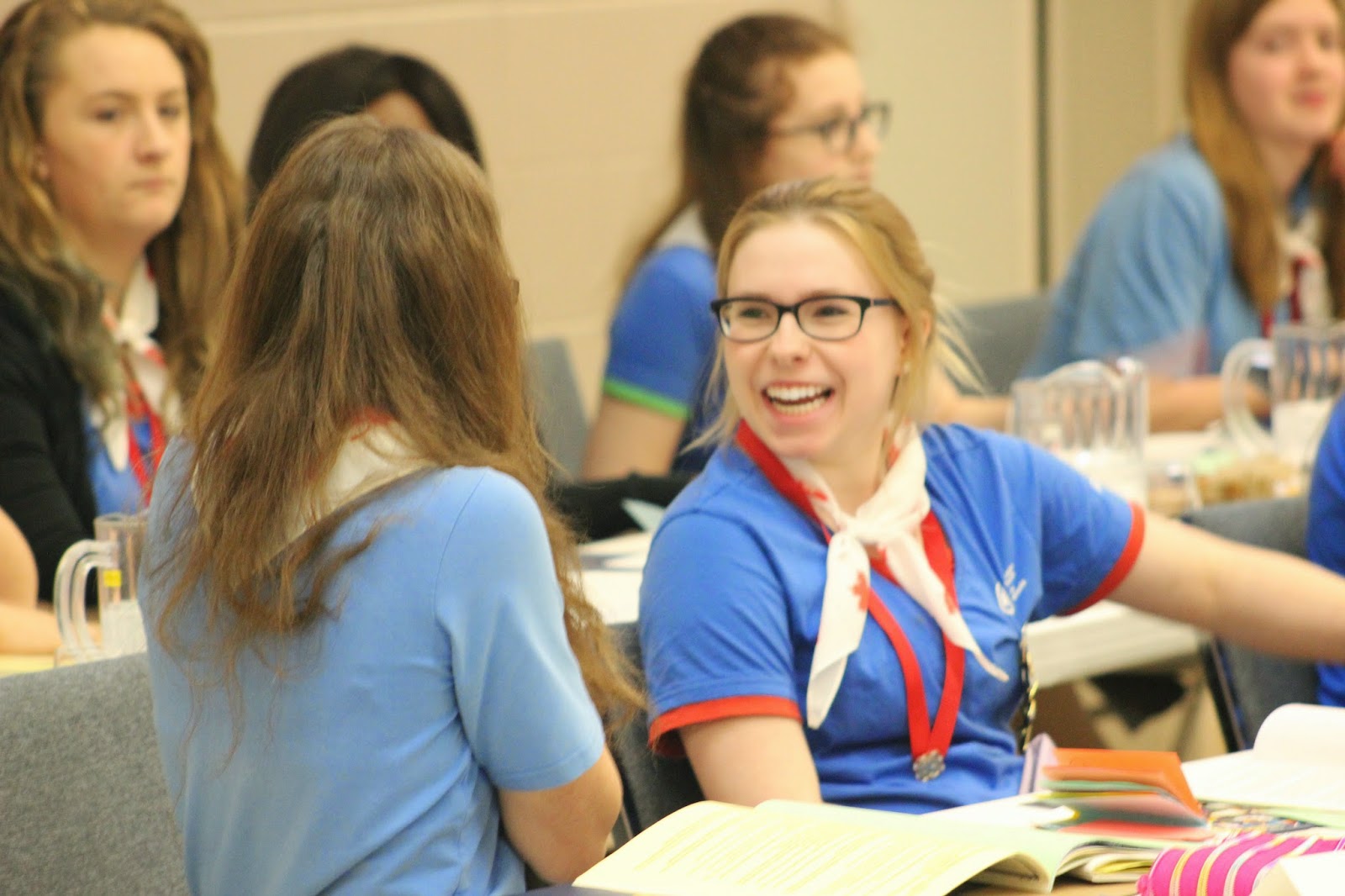 Reactions to finding out who was selected for the Commonwealth Bursary Award, congratulations Imogen and Rachel! 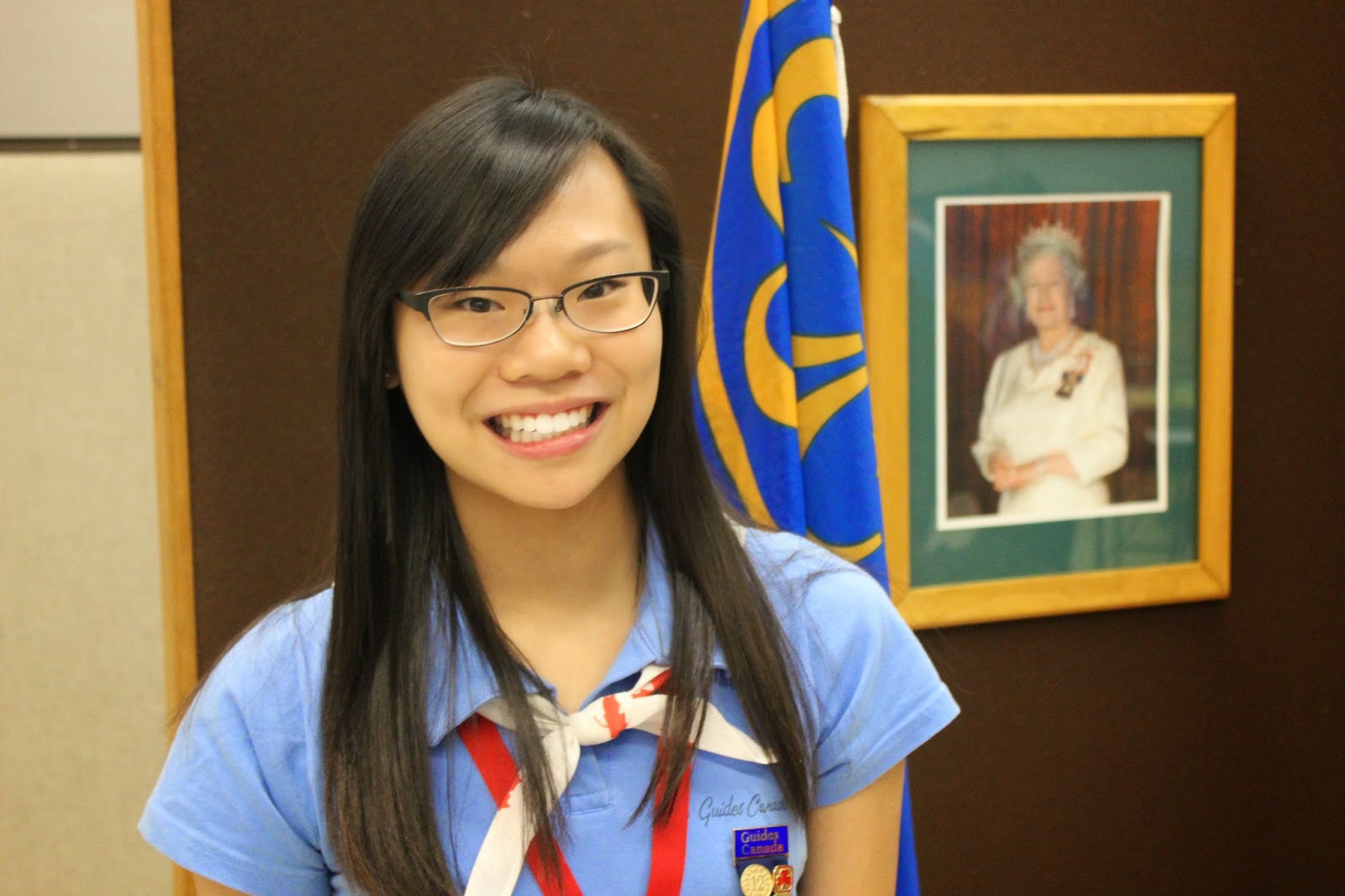 Kristen- AGP always includes a ton of fun, new learning experiences, and making new friends. This is my third year returning to AGP and each and every year, girls stimulate amazing debate that really get me thinking about politics. AGP is fantastic for girls who are new to public speaking and girls who already love debate. I most definitely got more comfortable with debate over the last 3 AGP sessions. 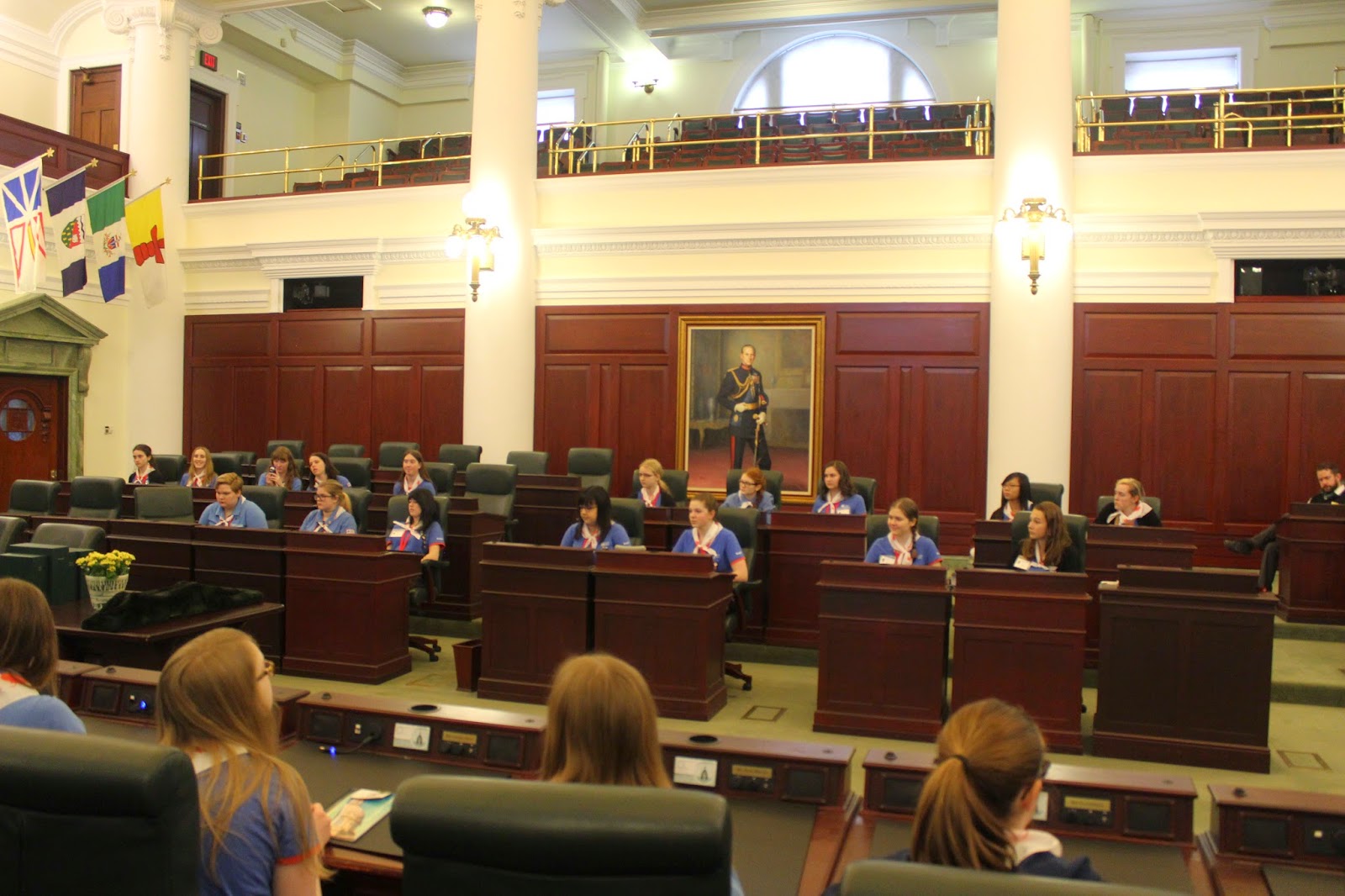 Sitting in the Alberta Legislature while listening to Speaker Gene Zwozdesky 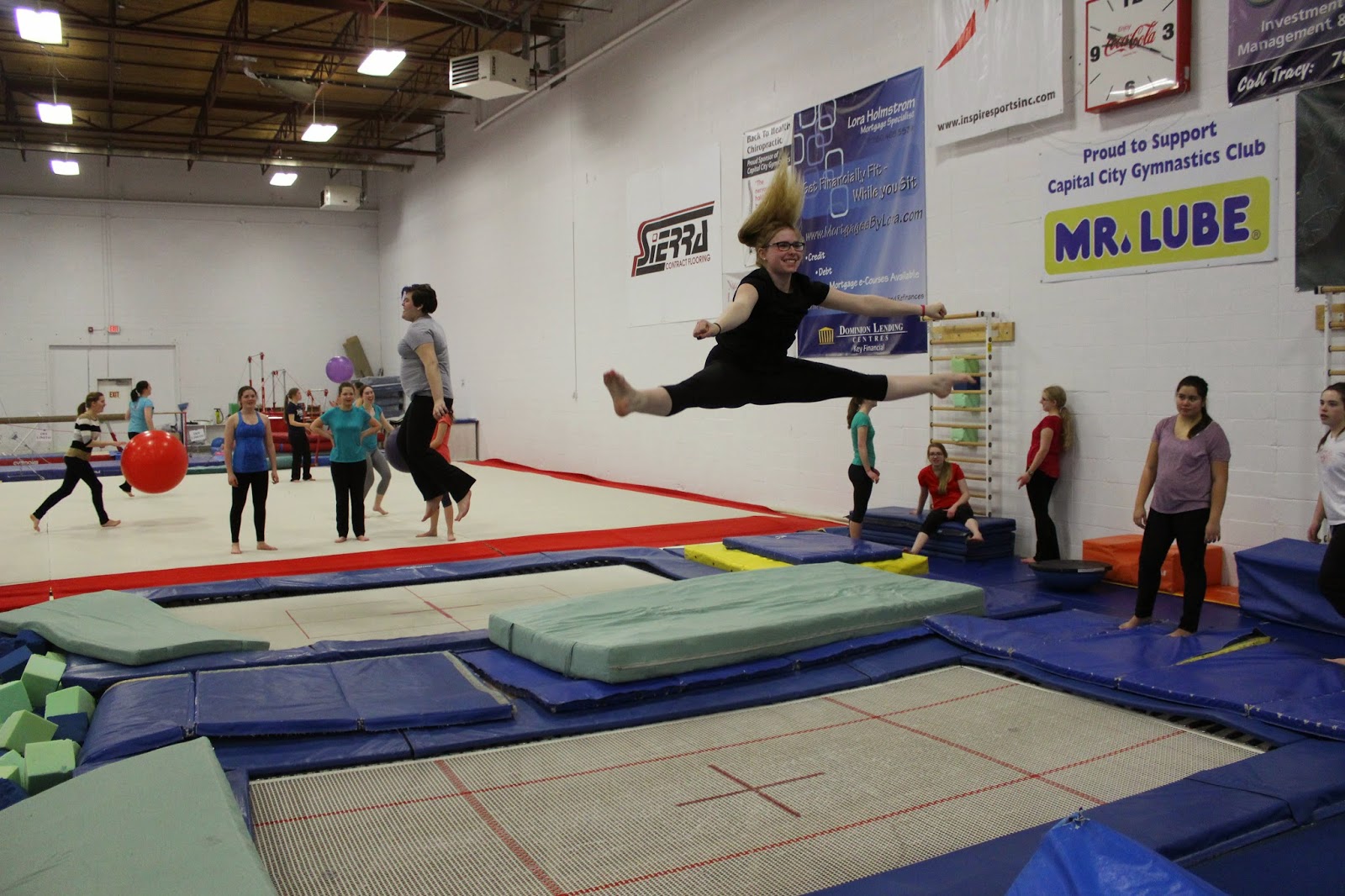 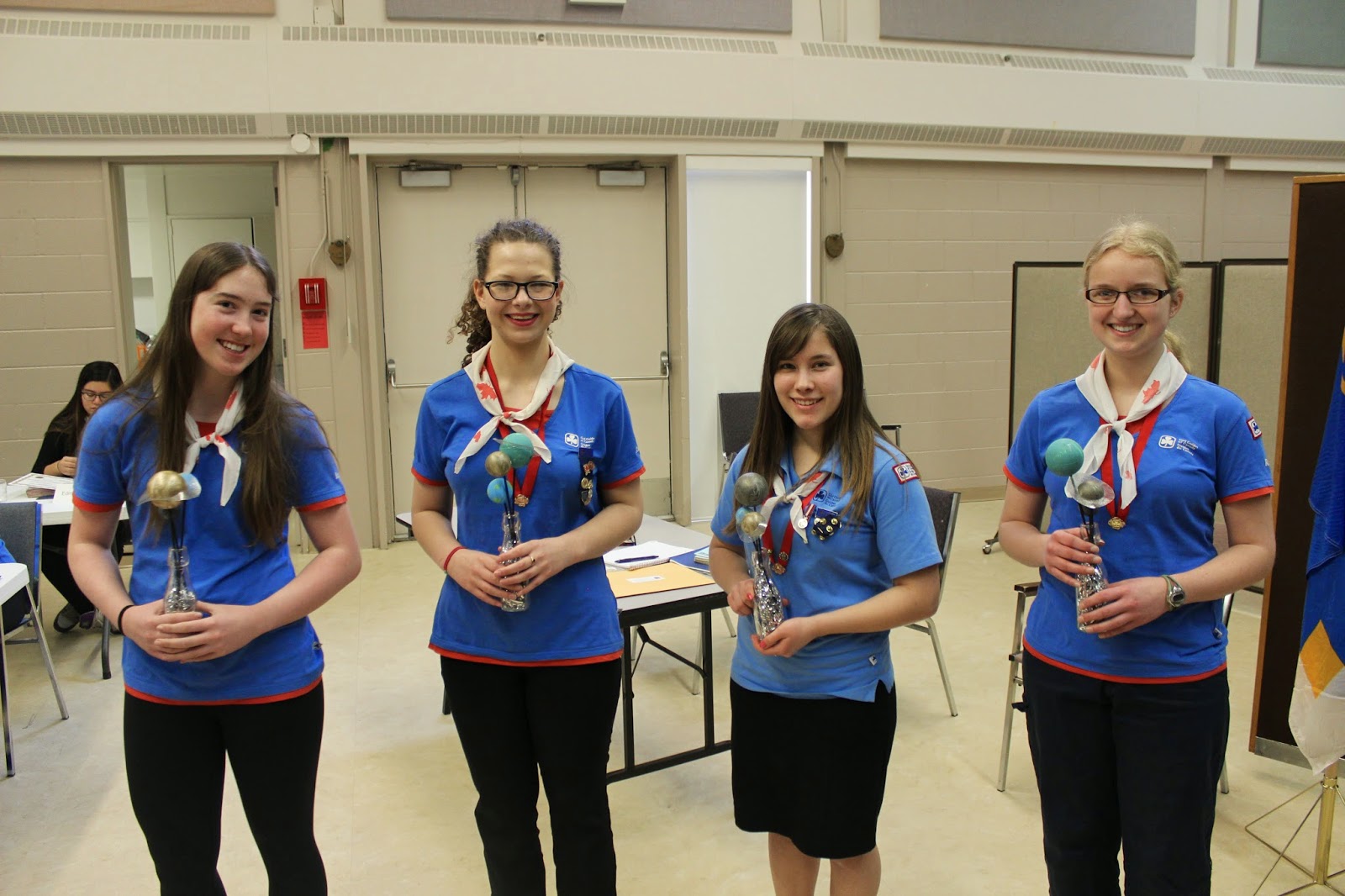 Thank you to the executive for planning and running such a great event! 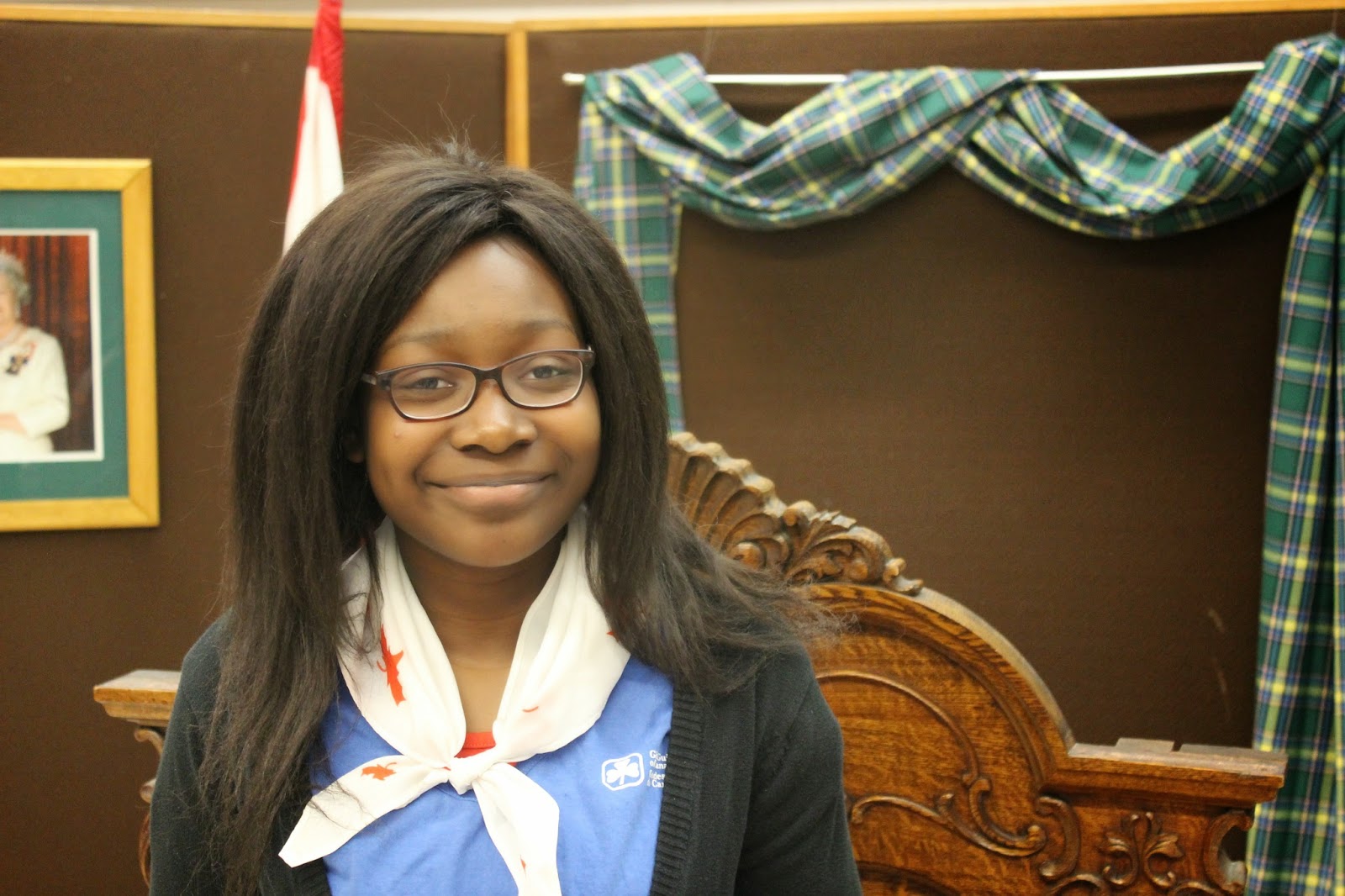 Charlotte- AGP is one of the highlights of my Guiding year. I love AGP because it helped improve my public speaking and makes me feel like my voice actually matters. At AGP we debate about relevant things that actually happen in the real world. My favourite thing about AGP is definitely the debates. It is so fun having meaningful intellectual conversations with people your age while still throwing shade. The best part about the debates was totally destroying the other sides arguments. I would recommend AGP to anyone, even if parliament and debate isn't your thing, there's still a place for you and you'll want to participate anyway. Even if you don't speak (like I did in my first year- it is my second) you can still have fun and feel accepted with all of your new friends. AGP is a great place to be. You learn a lot about politics and the world, and you get to meet tons of new, awesome people, and get tons of new friends. Join AGP! 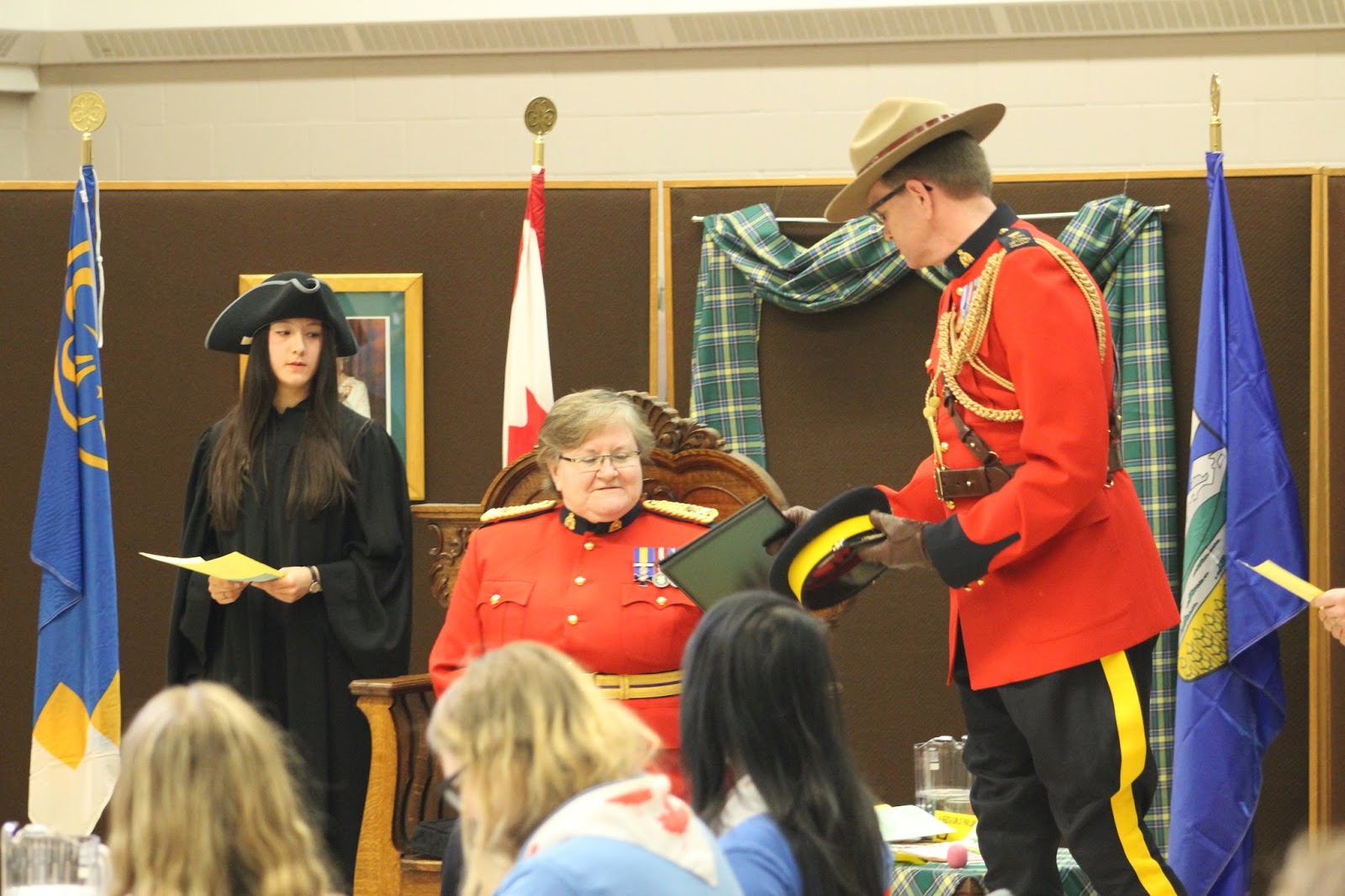 Parliament is officially prorogued by the Honourary Lieutenant Governor 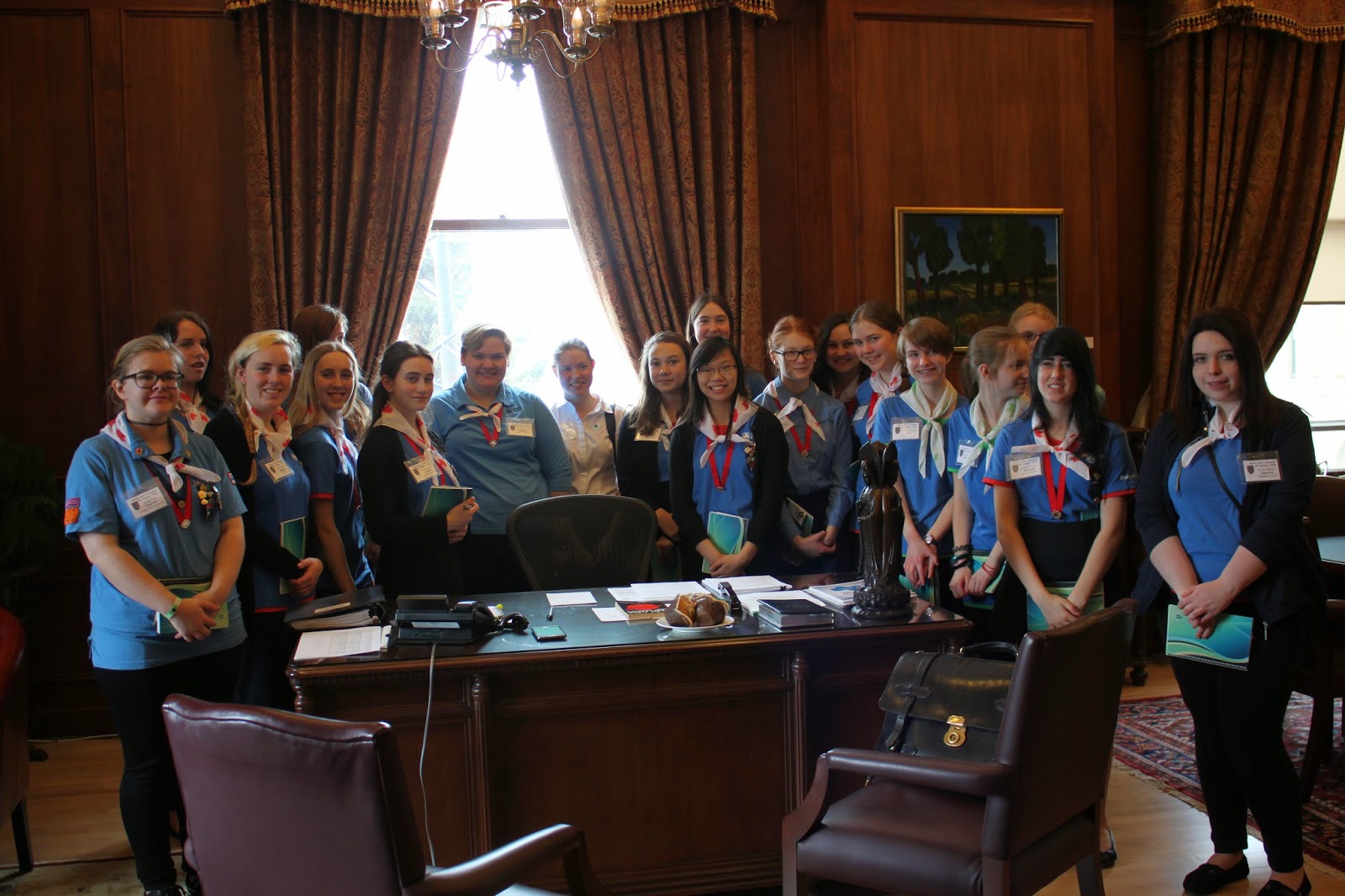 Inside the premier's office at the Legislature 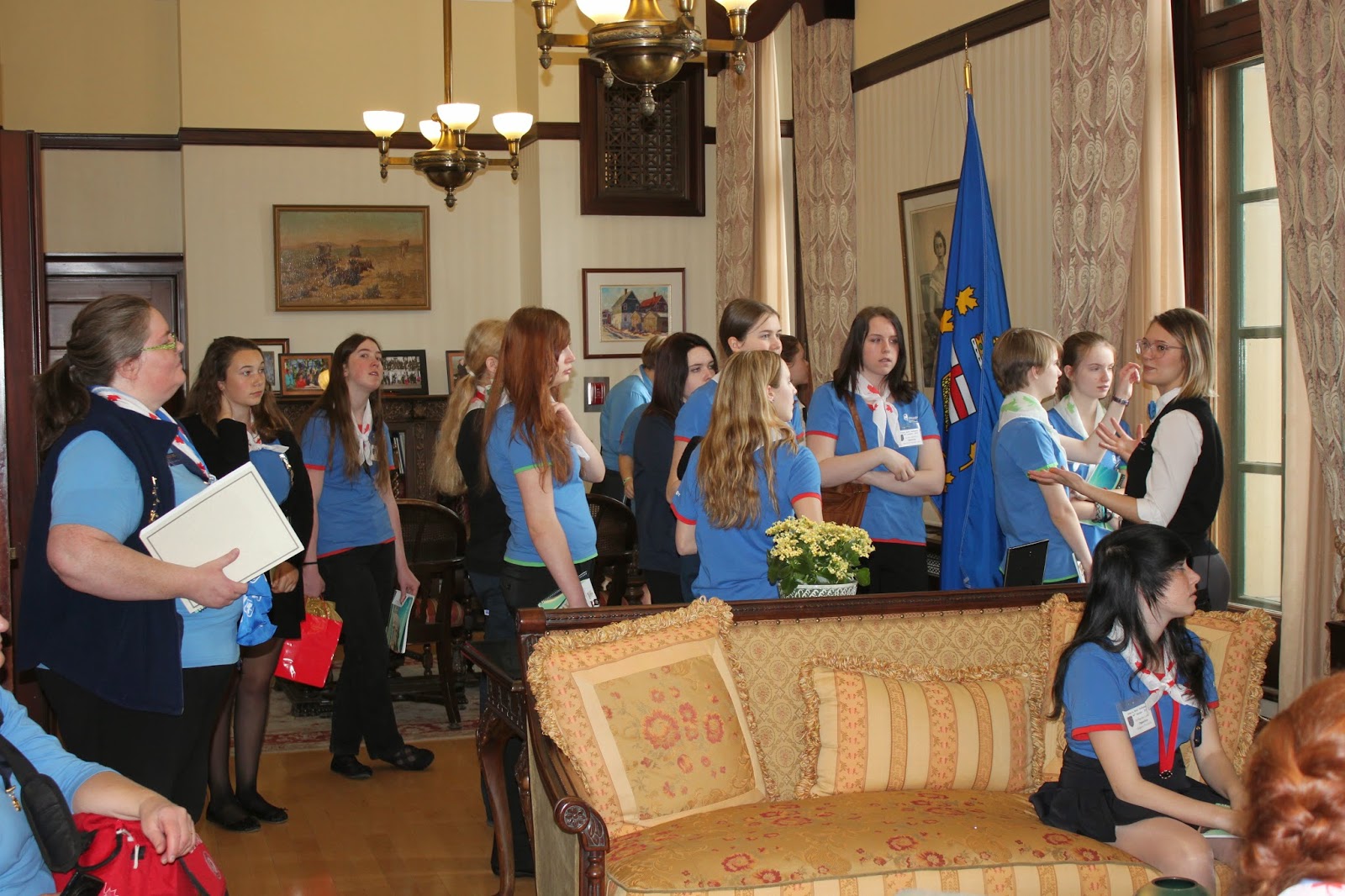 Touring the Lieutenant Governor's office in the Alberta Legislature 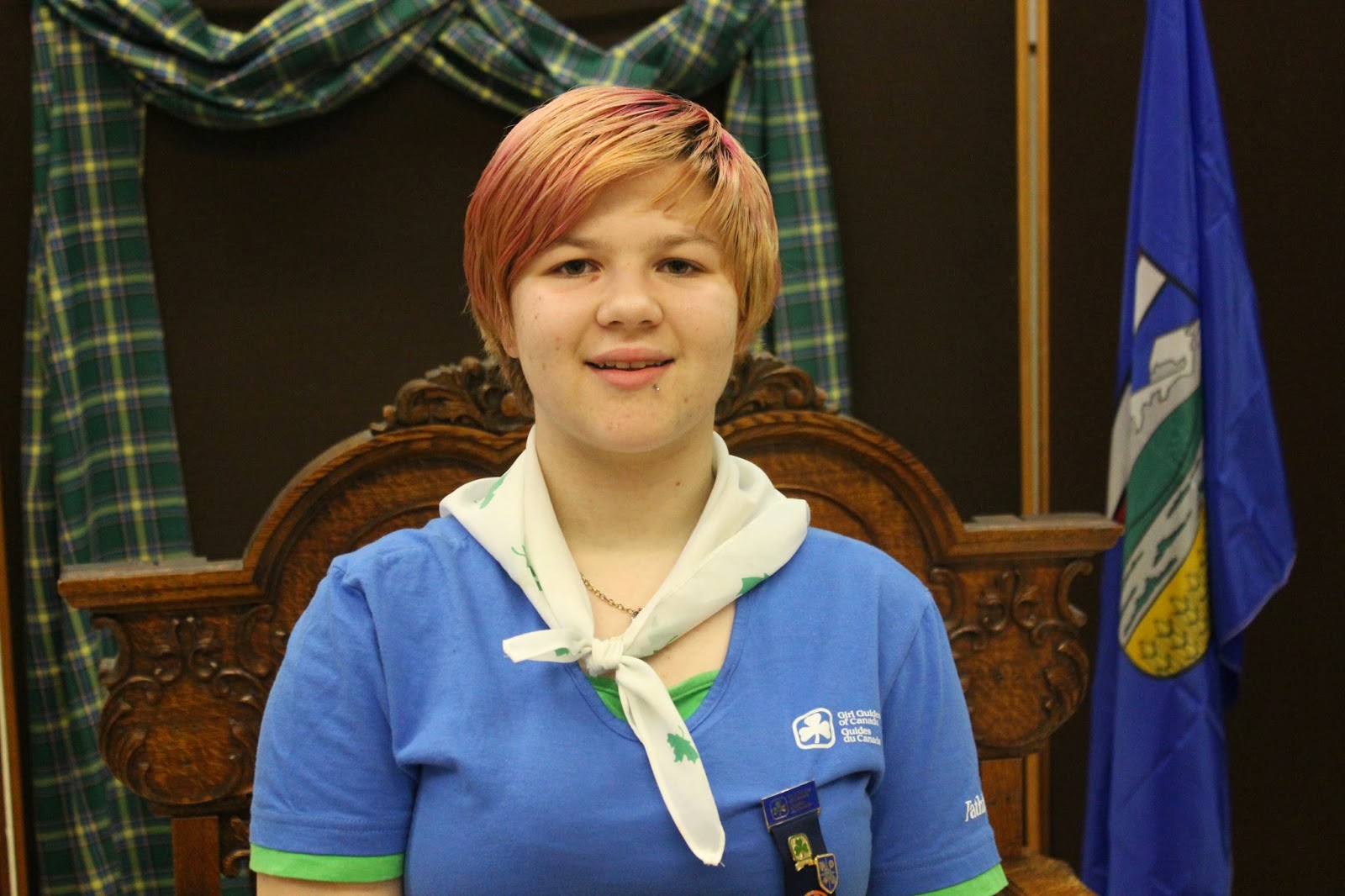 Alishia- During my time at AGP I never even had a chance to crack open my book, and I brought 4 LOL.I have to admit I was nervous that I wouldn't fit in, but honestly I was completely wrong. The girls I met brought me out of my shell, they taught me things that I wouldn't know otherwise. They taught me it was ok to be myself and they showed me that no matter how weird you are. There is always someone weirder (in a good way). I have grown into a great speaker and debater. People say chances come along once in a lifetime and this is one of those. 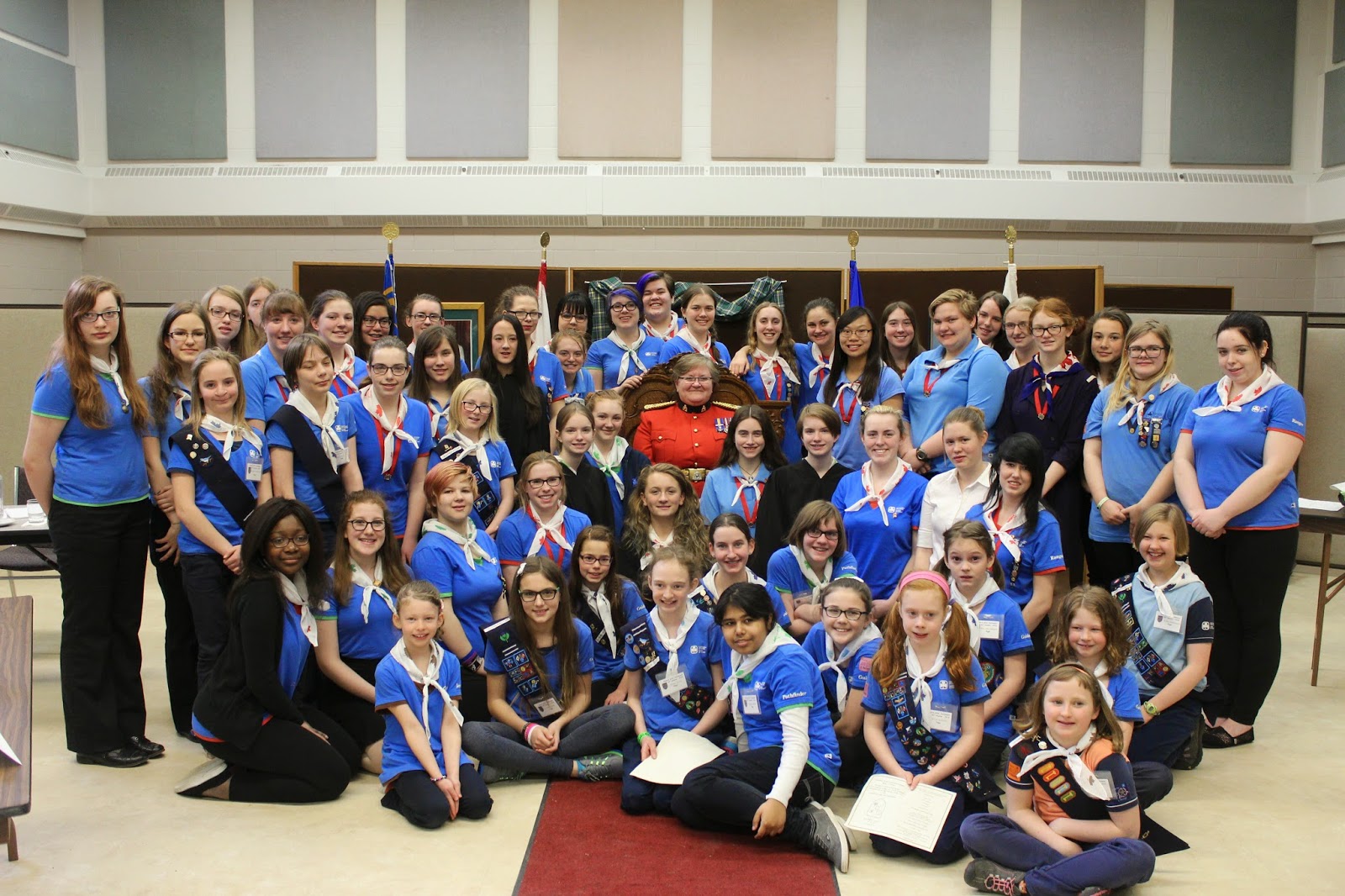 Delegates and pages with the Honourary Lieutenant Governor: Deputy Commissioner of the Alberta RCMP Marianne Ryan